Slightly Off-Topic: Voyage To The Bottom of the Sea Movie Reviewed

So, I arrived home Sunday from the monthly gathering of the Sunday Comix cartoonists group in time to catch the last forty-five minutes of Voyage To The Bottom Of Sea, the 1961 feature film by Irwin Allen upon which he later based the 1964-68 TV series of the same name, and I kind of feel like writing about it here.  Sure, this is supposed to be a blog about comics, but when it comes down to it, its my damn blog and I'll write about what I damn well want to write about and you don't have to read it if you don't want.  I haven't written anything for quite a while, so maybe I need to write about something other than comics just to shake loose the mental cobwebs, break down the mental blocks that are keeping me from writing, and get my fingers used to the feel of the keys again.  I do try to tie my tangents on this blog to comics in some way, however, and in this case its not really a stretch, as there were comic books based both on this movie and on the TV show inspired by it.

Anyway, even though I missed over half the movie, I had seen it before, though its been many years, so I knew the basic plot.  Besides, it appears that I didn't miss much.  It seemed as if not much had really happened up to the point I started watching.  At least not compared to the final twenty minutes or so, in which everything comes to a head and events seem to be happening all at once.
The basic premise of the film is that something has caused the Van Allen radiation belt surrounding the Earth to catch fire, heating the planet and threatening all life.   Admiral Harriman Nelson, in defiance of the United Nations and all world governments, takes his experimental sub, the Seaview, on a quest to save the world by firing a missile which, he believes, will extinguish the fire in the sky.  This is the movies, after all, where just about any problem can be solved by shooting it. 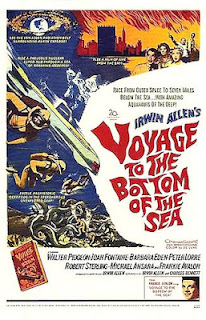 So, at the point that I joined the film, the Admiral is convinced that there's a traitor on board attempting to sabotage the mission, especially after an attempt is made on his life.  The Seaview's captain, Lee Crane, however, is beginning to think that the Admiral is mentally unstable.  Thus he also begins to doubt whether Nelson's plan will actually work.  To make matters worse, approximately half of the Seaview's crew, believing the end of the world to be at hand, desert to spend their last days with their loved ones.  At the same time, the crew learns that the United States has dispatched its entire submarine fleet to find and stop the Seaview.
Finally, all the various plot threads converge as the films barrels toward its conclusion.  The ship reaches its destination, arriving at the exact position and time at which the missile must be fired.  Convinced now that Nelson is nuts, Captain Crane moves to relieve him of command and stop the missile from being fired.  Meanwhile, one of the pursuing subs catches up to the Seaview and begins firing torpedoes at them just as the traitor reveals herself by sabotaging the ships nuclear reactor, taking a fatal dose of radiation in the process.  After eluding the attacking sub, the Seaview is then attacked by a giant squid. (After all, you just can't have a submarine based science fiction film without a giant squid.  It's like a law or something.)  Then, as if all that weren't enough, a religious zealot, believing the sky fire to be "God's will", holds the control room hostage with a bomb to stop the missile firing.  In the end, of course, the missile is fired, the flames are extinguished and the Seaview heads triumphantly home. 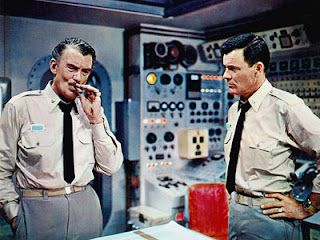 What really makes this film work despite its frankly ridiculous premise is that the actors portraying the Seaview's crew totally commit to the premise.  They seem to really believe in it and thus effectively sell it to the viewer.  Because of this, what could have turned into high camp becomes a tense and involving science fiction thriller.
Even with the scientifically questionable idea of the atmosphere catching fire, the most unrealistic part of the film, and the subsequent TV series, is the Seaview itself.  Anyone who's ever seen any other movies or TV shows set on a sub will be immediately struck by just how roomy the Seaview is, with its wide corridors, spacious living quarters and huge control rooms.  Even the crew dining area is gigantic.  This ship must be just crazy big, though the exterior shots don't really give a feeling for that scale. Its kind of like an underwater version of Doctor Who's TARDIS, bigger on the inside than on the outside. 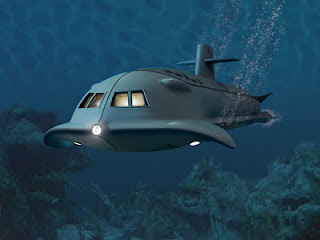 This movie can be seen as foreshadowing the remainder of Irwin Allen's career.  As I've already mentioned, it inspired his first, and longest running, TV series.  The success of the TV version of Voyage would lead to the creation of the far campier Lost In Space, and the less successful The Time Tunnel and Land of Giants.  Furthermore, the dubious, and, for the most part, totally made up, science upon which the film is predicated would become a hallmark of Allen's TV output in the 1960s. You could also say that with its all-star cast, which includes Walter Pidgeon, Barbara Eden, Peter Lorre, Joan Fontaine, Michael Ansara and Frankie Avalon, facing impossible odds while trapped together in a confined space, Voyage set the template for Allen's string of blockbuster disaster films in the 1970s, especially The Poseidon Adventure and The Towering Inferno.
For me, watching Voyage to the Bottom of the Sea, especially the series, carries with it a certain nostalgic resonance.  Voyage was a favorite show of my father's and I sort of feel a little bit of a connection to him whenever I watch it, or Mission: Impossible, which was another show he watched whenever it was on, mostly Saturday afternoons as I recall. Though, even without that extra layer of meaning, I'd still enjoy this movie, and if you have a chance to see it I'd definitely recommend that you do so.
Posted by Ray "!!" Tomczak at 11:40 AM