I'm dashing this post off before I head out to the Ramada Plaza Hotel (4900 Sinclair Road in Columbus, OH) for the second day of the fourteenth annual Small Press and Alternative Comics Expo (SPACE).  I will again be mostly at the Sunday Comix table pitching the various comics for sale there, including our latest collection of jam comics, The Sunday Comix Jam-versary, celebrating the group's tenth anniversary.  When I wrote about this book a couple of days ago, I posted some preliminary cover art, but now I can show you the finished cover.  So if you're heading out to the show today, look for this cover: 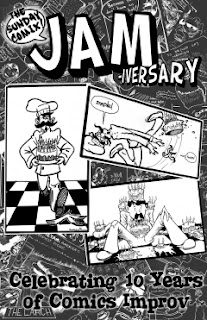 Also, we of Sunday Comix are once again holding a raffle at the show with the proceeds to be donated to the American Foundation for Suicide Prevention.  As the show opened yesterday, Canada Keck hit up all the exhibitors for donations to the prize pool, and came back to the table with enough booty to fill six gift bags.  Yesterday we held three drawings, raising over one hundred twenty dollars.  Today, we plan three more throughout the day.  So, if you're at the show, stop by and get a ticket or several.  We're selling them for two dollars each or a strip of 12 for ten dollars.  The money will be going to a good cause and one that is very near to the hearts of the members of Sunday Comix, you get a shot at going home with a collection of some of the best comics being done today.
I hope to see you there.
Posted by Ray "!!" Tomczak at 7:24 AM