The Kindly Ones (Sandman and Related Topics) 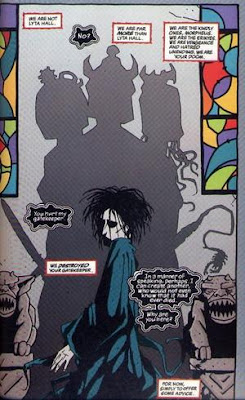 Back in the 1990s, you saw a lot of a certain class of story in DC comics, although then, as now, I wasn't really paying a lot of attention to Marvel so there may be some examples from that company that I'm unaware of, in which a writer approaching the end of his tenure on a given titled concocted a tale in which he tied up all the loose ends from his run while simultaneously destroying all that he built up over his years on the book.  Some examples include "Breakdowns" in Keith Giffen's Justice League titles, the Candlemaker story in Grant Morrison's Doom Patrol, Garth Ennis' "Rake at the Gates of Hell" in Hellblazer, and the story which is the subject of today's post, "The Kindly Ones," which spanned Sandman #'s 57-69 and brought the story of Morpheus, the Lord of Dreams to a close.
This type of catastrophic story tends to make things a bit challenging for the next writer.  Ennis' successor had it easiest, perhaps, as Ennis, in erasing all that he had created, pretty much left John Constantine as he had found him.  It took a little while, but the Justice League comics eventually bounced back from the repercussions of "Breakdowns."  On the other hand, I don't that the Doom Patrol has ever fully recovered from Grant Morrison's departure.  John Byrne's continuity ignoring reboot of the team only made matters worse.  Now, technically, there was no next writer on Sandman, which, after six issues of epilogues, ended with #75.  However, there was the follow-up series The Dreaming, which continued the stories of many of the characters from Neil Gaiman's story, beginning as an anthology with rotating writers before settling down with a regular author about two years into its run and going on to enjoy a respectable lifespan of 60 years over five years.
The real problem with these run ending stories is that they often seem driven more by plot necessities than creative inspiration.  Its almost as if the writer starts out with a laundry list of things he needs to accomplish before moving on, and the writing is just a matter of connecting the dots.  Keith Giffen's list probably included such items as
Over the course of "The Kindly Ones," Gaiman dutifully checks off all the right boxes, providing his readers with everything they wanted or needed to see before saying good-bye.  Favorite characters from past storylines; Delirium, Lucifer, Hob Gadling, and, of course, Death; are trotted out for one last bow.  Dangling plot threads involving Loki, Puck, Rose Walker, and, most importantly, Hyppolyta Hall and her son Daniel are gathered together and tied off.  The identity of the woman over whom Morpheus was moping at the start of "Brief Lives" is revealed, although why, other than to give fans something to speculate on, this was kept a mystery is, to me, a mystery in itself. The supporting players are all given a final moment in the spotlight and the story of this aspect of Dream of the Endless is brought to a conclusion.
The heart of the tale is the abduction of Daniel Hall, the child born to former super-heroine Hyppolyta Hall after her time spent living in a remote corner of the Dreaming with her dead husband Hector, as shown in the earlier story "The Doll's House," and Lyta's efforts to exact revenge on Morpheus, whom she mistakenly believes responsible for her son's disappearance, by seeking out the Furies, a.k.a. the Kindly Ones of the story's title, who set about to destroy Morpheus for the crime of killing his own son, Orpheus, at the end of "Brief Lives."
The pace of "The Kindly Ones" is less frenetic than some of the other examples of end of run stories I've cited previously.  Gaiman makes time for an issue detailing a week in the life of the Dreaming and a particularly grim fairy tale related to Rose Walker by an aspect of the three witches.  Even these diversions, however, seem like just another item on the checklist, as if Gaiman knew that these types of stories within stories were expected in of him in a Sandman story and so he gave them to us.
I've been a little harsh so far in my assessment of "The Kindly Ones," but that doesn't mean I don't like the story.  That's not the case at all, actually.  Even though this particular arc seems a little bit more by the numbers than most  as it moves toward its inevitable conclusion, "The Kindly Ones" is nonetheless a well told and beautifully written tale that provides a satisfying climax to the much loved series.
Posted by Ray "!!" Tomczak at 4:27 PM