A New Villain is Born "When Heroes Clash!!" in Avengers #158 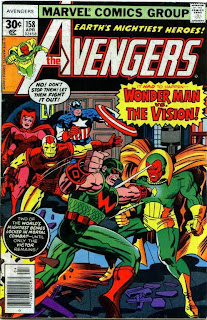 I occasionally like to tie my ramblings about musty old comics to current events in the comic book world in order to give this site some illusion of relevance.  Thus it is that I have decided to write about Avengers #158 at this time.  To tell the truth, I really wasn't planning to write about this issue at all.  I have nothing good to say about it.  Nor, for that matter, do I have anything bad to say about it.  It is a wholly unremarkable, absolutely average comic book.  However, recent events have made this issue somewhat relevant as a character introduced in it will soon be playing a recurring role on the ABC TV series Marvel's Agents of SHIELD.
I came across the issue in a quarter comics box at Half-Price Books a couple of months ago and picked it up because:

Obviously, I'm no fan of Shooter's writing, but this is no Secret Wars II.  It is, as I said above, a competently written and drawn (by Sal Buscema and Pablo Marcos) if somewhat unimpressive super-hero comic.
You've probably heard it said that it sometimes seems as if the Avengers spend more timing fighting amongst themselves than they do fighting super-villains.  Well, this issue is about evenly divided between the two, with six pages devoted to intra-team squabbling and seven to battling their newest foe, with four pages in between to introduce the villain. The story opens in the wake of another battle in Avengers mansion during which the team fought a magically animated statue of the Black Knight.  The Vision then proceeds to work himself into a jealous rage over the way Wonder Man and Scarlet Witch are talking to each other and proceeds to slap Simon around.  Their battle further damages the already wrecked mansion until Iron Man steps in an puts a stop to it.  At this point, the team's butler, Jarvis, walks and tells them that he just received a call for the team's help, but he told the caller that the Avengers were too busy beating each other up.
The call came from a scientific research community nestled in the Canadian Rockies, where a man named Frank Hall, who gained the power of control over gravity in an accident that occurred while he was trying to develop a teleportation beam, has taken over and cut the city off from the outside world.  Just as he dons for the first time his garish costume and rechristens himself Graviton, the Avengers finally arrive.  However, Graviton dispatches the heroes fairly quickly, then declares that nothing can now stop him from ruling the world.  Thus ends "When Heroes Clash!!", with the story to be continued in Avengers #159.
Now it has been reported that a character by the name of Dr. Franklin Hall will appear on a regular basis in Agents of S.H.I.E.L.D. beginning with the third episode.  It is apparently not known at this time whether the TV version of Hall will be calling himself Graviton or even have any super-powers.
If he doesn't at least have the gravity powers, I don't see the point of including the character in the show at all.  If Hall isn't going to resemble his comic book counterpart at least partially, then the producers might as well go ahead and create an original character with a different name.
I'll guess I'll just wait and see how they handle the character.  I'll most likely be watching the show which debuts tomorrow night on ABC.
Posted by Ray "!!" Tomczak at 4:00 PM