The Greatest G'Nort Stories Ever Told

In honor of St. Patrick's Day, we turn our attention to one of the super-hero genre's proudest wearers of the green; a most distinguished member of that fabled cadre of interstellar policemen known as the Green Lantern Corps.  I speak of the greatest being ever to wear a power ring, none other than the inimitable G'Nort Esplanade Gneesmacher.  From the moment that he burst upon the scene in 1987's Justice League International #10, this furry wonder immediately captured the hearts and minds of comics fans the world over, and quickly became a beloved fan favorite.
Well, maybe not, but I like him.  Thus, I have compiled a list of what I consider to be the five best stories featuring the character. 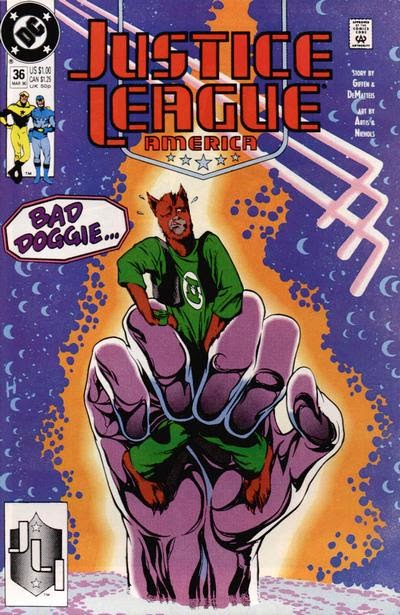 For the number five spot on my list, it was a toss-up between this issue and Justice League Quarterly #2's "Designing Humans."
"G'Nort by G'Nortwest" finds G'Nort's "arch-enemy", by virtue of being the only criminal G'Nort ever actually apprehended, the Scarlet Skier, former "locater" for interplanetary designer Mr. Nebula, coming to Earth after being released from prison to seek revenge on the Green Lantern who put him behind bars.
The JLQ issue, in which Mr. Nebula comes to Earth looking for the skier and the Justice League must prevent him from redecorating the planet, is actually, in my opinion, a better story.  However, JLA #36 features G'Nort more prominently, so it makes the list.

4. Green Lantern #9-#12
"A Guy And His G'Nort"
by Gerard Jones, Joe Staton and Bruce Patterson 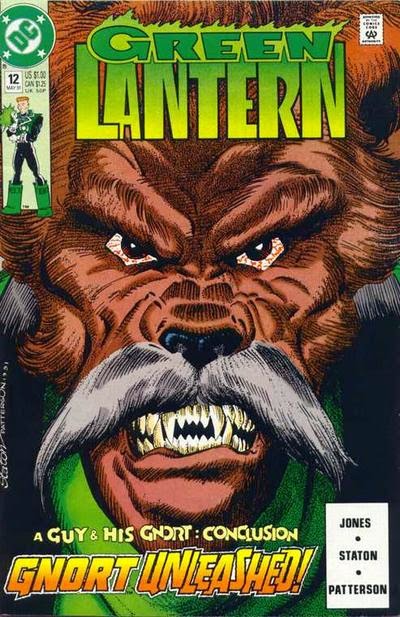 Although this was billed as the first ever Guy Gardner solo story, the JLI's brain damaged ring-bearer isn't exactly going it alone for these four issues.  He's got ol' G'Nort in tow as the two go on a quest to uncover G'Nort's true origins.  After the newly returned Guardians of the Universe reveal that they've never seen or heard of G'Nort before, Guy and G'Nort uncover a plot by the Thunderers of the Anti-Matter universe of Qward to discredit the Green Lantern Corps by distributing fake GL rings to idiots like G'Nort.  G'Nort, however, proves himself truly worthy of the ring when he sacrifices his power to save Guy. 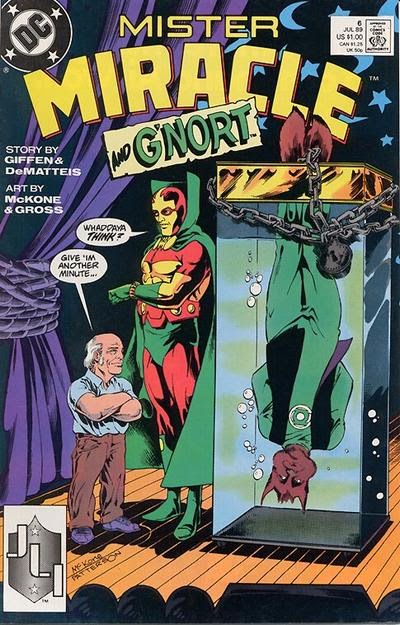 When some two-bit gangsters try to get a protection racket going in Bailey, New Hampshire, the small town where Scott Free (a.k.a. Mr. Miracle) and his wife Barda have settled down, Oberon contacts the Justice League for help and G'Nort answers the call.  Any story that contains the line "Help! A giant dog is trying to sell me insurance!" has got to be a classic. 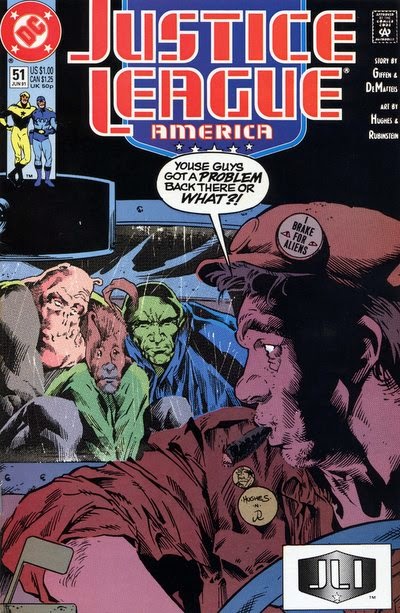 I actually have two copies of this issue.  One is to read, and the other is bagged, boarded and signed by artist Adam Hughes.
When G'Nort drops by the JLI's New York embassy for a surprise visit, a bored of his skull Kilowog invites his "brother alien" out for a night on the town.  J'Onn J'Onnz, the Martian Manhunter, tags along to keep the pair out of trouble.  You can imagine how well that works out.  You've got to wonder who thought that taking G'Nort to see Cats was a good idea, and things only get worse when a super-villain attacks during dinner.
This issue was a serious candidate for the top spot on the list, but after some consideration I decided to give it to: 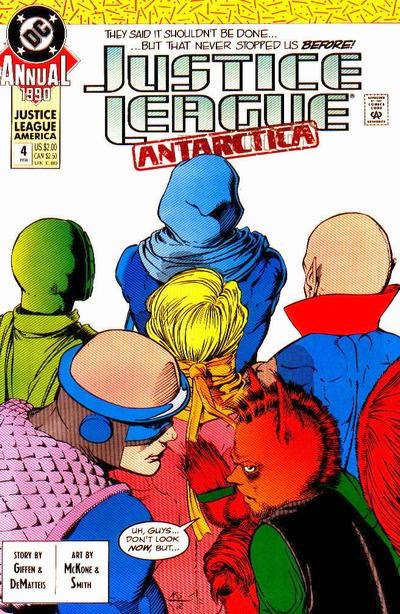 After inadvertantly foiling a robbery, which they themselves had intended to commit, the quintet of inept second rate super-villains known as the Injustice League find themselves hailed as heroes and decide to go straight, offering their services to the Justice League International.  Together with G'Nort and the Scarlet Skier, they become Justice League Antarctica and soon find themselves facing a horde of genetically engineered, man-eating penguins.
There you have it, dear readers.  The Top 5 G'Nort stories.  Proof, if any were needed, that G'Nort Esplanade Gneesmacher is indeed the greatest canine Green Lantern of them all.
Posted by Ray "!!" Tomczak at 4:00 PM