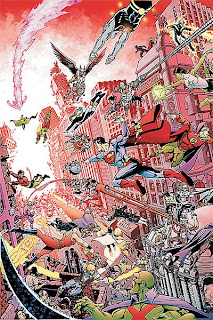 DCU: Legacies is a ten part series from DC (of course) that takes a Marvels-style approach to retelling the history of the DC Universe, filtering that history through the eyes of Metropolis policeman Paul Lincoln. The latest issue (#5) picks up where the previous one left off, with the death of the first Doom Patrol jumps pretty quickly to the Crisis on Infinite Earths, pretty much skipping the entire 1970's, including the coming of the New Gods, the debut of Black Lightning and the murder of the original Mr. Terrific.  The only events of the period that do merit a mention are the debut of Firestorm and the emergence of the second Doom Patrol.  Aside from those exceptions, writer Len Wein picks up the story with the debut of the New Teen Titans before getting right to Crisis.  Appropriately, the art for this issue is provided by Titans/COIE co-creator George Perez.
This is the weakest issue of the series so far. In my opinion, that's due to the series' "man on the street" approach to the events its chronicling being ill-suited for a retelling of Crisis On Infinite Earths.  Such an approach fails to convey the cosmic scope of the story, and some of the most pivotal events of the narrative are occurences that a beat cop in Metropolis could not be privy to, as they take place in settings such as the anti-matter universe or at the dawn of time.
This, in a way, was also the problem with the Crisis On Infinite Earths novel penned by Marv Wolfman a few years back, which retold the story through the eyes of the Flash.  By focusing mostly on one character, the novelization sacrificed much of the epic, cosmic grandeur of the original.  The same is true of Legacies' focus on ordinary people in the Crisis. 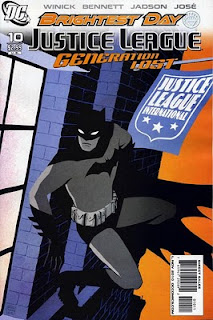 Meanwhile, in the tenth issue of Justice League: Generation Lost absolutely NOTHING happens.  Really.  It became quite clear a few weeks ago that Judd Winick does not really have enough plot to fill twenty six issues, and now his problems pacing the narrative are becoming painfully apparent.  We're getting a couple of, to coin a phrase, "all-out action issues" followed by an issue or two of pure filler.  This week's edition was one of those filler issues.  Basically, as I said before, ABSOLUTELY FREAKIN' NOTHING HAPPENS.  The characters just stand around and talk for the entire issue.  Winick even brings in characters who aren't even part of the main story, Batman and Power Girl, to stand around the Batcave and talk in what is probably one of the most pointless scenes I have ever read in a comic book.
I've been sticking with this series because I like the characters and because the good issues, which do outnumber the bad, are pretty good.  But as the halfway  point of the series approaches, I am going to have to decide if this book is really worth three bucks every two weeks.
Posted by Ray "!!" Tomczak at 8:24 PM