Just Sit Right Back and You'll Hear A Tale...

I believe that I can aver with a certain degree of confidence that I would be a different man today if not for Sherwood Schwartz.  Who can say how I might have turned out if I had not been exposed early and often--every afternoon at either four or four thirty--to reruns of Gilligan's Island.  I might even have actually made something of myself.
I wouldn't classify Gilligan's Island as a guilty pleasure, for I am not ashamed of it in the least.  I offer no apology for my love of Gilligan, the Skipper and the passengers of the S.S. Minnow, nor can I really explain it.  It simply is.
My affection for the show is common knowledge to readers of my on-line comic strip Wasted Potential.  The strip was peppered throughout its four year run with allusions and references to Gilligan's Island.  Early in the strip's run I mentioned Schwartz by name, dedicating the following installment to him for all the hours of entertainment and escape from reality that I found in his most famous, and ridiculous, creation. 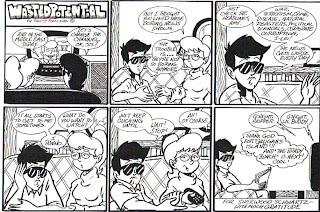 (click to enlarge)
Sherwood Schwartz, creator of Gilligan's Island, The Brady Bunch, and several not so well known TV shows such as Dusty's Trail, which reunited Schwartz with  Gilligan star Bob Denver and was, essentially, Gilligan's Island in the American Old West, died early this morning at the age of 94.
Posted by Ray "!!" Tomczak at 7:38 PM

Email ThisBlogThis!Share to TwitterShare to FacebookShare to Pinterest
Labels: comic strips, my comics, news, only vaguely related to comics