In honor of Independence Day, which I fully realize was four days ago, today I look at the Bronze Age adventures of a certain flag draped champion of America's liberties in the face of Nazi aggression during the dark days of the Second World War.  I speak, of course, of none other than...
Steel--The Indestructible Man! 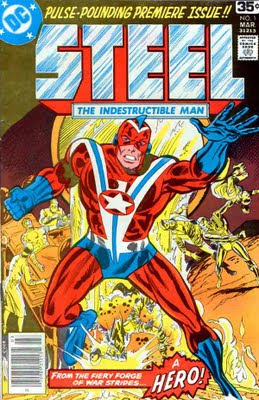 Those of you without an encyclopedic knowledge of the DC Universe and obscure, short-lived Bronze Age comics are probably scratching your heads and saying to yourselves, "Wha..? Who?"
Hank Heywood, the eponymous star of DC Comics' 1978 series Steel, The Indestructible Man, is perhaps best described as a cross between Steve Rogers, a.k.a. Captain America, and Steve Austin, the Six Million Dollar Man, that is--not the professional wrestler.  Accompanying his mentor, the famed biochemist Dr. Gilbert Giles, to a medical conference in Munich, Germany in the summer of 1939, Heywood becomes convinced that, despite resistance by the majority of the American public, the United States would eventually have to enter the fight against Hitler.  Upon learning of the invasion of Poland, Hank acts on his convictions and enlists in the Marines.  One night, he encounters minions of Nazi costumed villain Baron Death breaking into his base.  In attempting to stop them he is caught in an explosion that kills the saboteurs and leaves him barely alive.   Dr. Giles uses his discoveries in the field of organ transplants to rebuild Hank's shattered body, installing a steel reinforced skeleton and an artificial lung.  Hank emerges from the procedure with enhanced strength and endurance. so he naturally decides to don a red, white and blue costume and take the nom de guerre "Steel" in hopes of inspiring the American people to join the fight against fascism while battling spies, saboteurs and super-villains.
The "DC Implosion," the mass cancellation of nearly half of DC's line in late 1978, was particularly unkind to writer Gerry Conway, who had three titles cancelled out from under him.  Two, Steel and Firestorm, The Nuclear Man, were retired after five outings apiece, and one, The Vixen, was axed before its debut issue even went to press.  Firestorm proved to have legs, enjoying a quite respectable 100 issue run after his book was revived as The Fury of Firestorm four years later after a run as a back-up feature in The Flash and his induction into the Justice League of America, which Conway was also writing at the time.
Steel, on the other hand, was most likely destined for obscurity from the outset and probably wouldn't have lasted much more than five issues even if the DC Implosion had never happened.  The concept was derivative and the stories rather uninspired.  Furthermore, I don't think that the zeitgeist of  late 70's, post-Watergate America was right for a patriotic themed hero.
The art by Don Heck probably didn't help Steel's cause, either.  I've never been a fan of Heck's, but I will admit to liking his work at Marvel in the 60's a tad more than the 80's material that was my introduction to him.  By '78, whatever gifts he displayed in his Marvel output had not yet entirely deserted him, but they were edging slowly toward the door.  The figures are stiff and awkward and the storytelling is unclear in spots.  Older comics are often chided for having characters utter expository dialogue telling the readers exactly what is going on in the picture, but there are spots in Steel where you need that exposition to tell you what you're supposed to be looking at.
Just as he had with Firestorm, however, Conway used his position as writer of Justice League of America to rescue the Indestructible Man from comics limbo.  A contempory version of the character, the grandson of the original--also named Hank Heywood, would eventually, along with Conway's other DC Implosion casualty, Vixen, join with new creations Vibe and Gypsy to form the core of what is generally referred to as the "Detroit League" following the disbanding of the original JLA.   The second Steel was no more popular with readers than his grandpop had been, however, and was killed off in the final issues of the League's first series.
Now, I haven't really been following the Justice Society's recent series, but I believe I read on-line somewhere that another descendant of the senior Hank Heywood has recently taken up the mantle of Steel.
Given the characters utter failure to catch on with readers in any incarnation, it's no surprise that the '78 series has never been collected or reprinted.  However, if you really want to read it, the back issues aren't hard to find and are pretty cheap.  I encountered copies of Steel #1 at at least a half dozen dealers tables at the last Mid-Ohio Con and paid no more that a quarter for each of the three issues I eventually purchased.  For that price, it's worth checking out at least one issue, I suppose.
Posted by Ray "!!" Tomczak at 5:30 PM