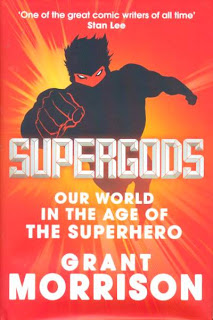 Ok, let's start right off with the one major problem with Grant Morrison's Supergods: Our World In The Age Of The Superhero. (At least, that's the subtitle on my copy of the book, which is apparently the British edition.  It's amazing what you can come across at Half-Price Books, ain't it?  [My copy of Scott McCloud's Making Comics carries the warning "Uncorrected Proof: Not for Sale" on the back cover.]The American edition carried the tag "What Masked Vigilantes, Miraculous Mutants, and a Sun God From Smallville Can Teach Us About Being Human."  The AV Club called that "ponderous."  I kind of agree, but as the entire book tends to be a little ponderous, perhaps its totally appropriate.  Still, I prefer the British version of the title.)  There are, as you might have inferred from my parenthetical asside just now, some other smaller problems with the book, but only one that really bothers me.  Its a problem I've noticed, but chose to overlook in most cases, in other histories of the comics, but find a little more egregious in this case.
I don't think that I've ever read a history of comics that didn't include at least a couple of factual errors.  I am usually forgiving of  these because most of those books are written by "outsiders" with a particular thesis to prove or agenda to advance, little things like research or accuracy be damned.   Morrison, however, is an industry insider and a self-professed life long fan, so such errors are somewhat harder to overlook, especially when they concern properties on which the author built his considerable reputation in the business.
Now that I've got the nit-picky stuff out of the way, let me say that I quite enjoyed this book, actually. 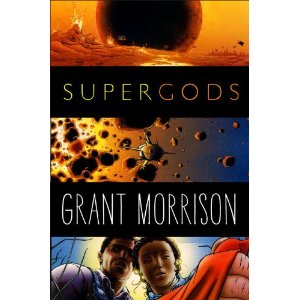 Morrison does have his special thesis to advance in this book, which is equal parts history of comics and autobiography of Morrison himself.  That only makes sense, as for the past twenty-five years or so the two have been intimately intertwined.
Morrison's thesis is that we all have the potential to become superheroes, and, with the aid of 21st century technology, in fact already are, and that tales of fictional superheroes have been there for us over the decades to show us the way.  To be honest, there's really nothing startlingly original in Morrison's theorem.  It's really just another variation on the old "superheroes as modern mythology" trope that's been with us for ages.  Morrison, however, does manage to bring to the table an understanding of psychology, alchemy, and magic as well as a knowledge of world mythologies that goes beyond the Greek/Roman pantheons that are the traditional basis for the metaphor.
The main appeal of Supergods, especially for Morrison's fans, is Grant's breathless, hyperbolic prose, most on display during the comics history parts of  the narrative.  He details the real life history of superheroes in the same mythopoeic terms that he applies to  their fictional adventures. Here's a sample from the very first page of the first chapter:

"From the beginning, the ur-god and this dark twin presented the world with a frame through which our own best and worst impulses could be personified in an epic struggle across a larger-than-life, two-dimensional canvas upon which our outer and inner worlds, our present and future, could be laid out and explored.  They came to save us from the existential abyss, but first they had to find a way into our collective imagination."

"Ur-god and his dark twin...?"  Couldn't just say Superman and Batman, could you, Grant?  That passage, besides setting the tone for most of what's to come, also serves as a fairly succinct synopsis of Morrison's central theme.
When he turns this same technique to his own life story, its just as fun to read, for the most part, though it at times comes off as immodest self-aggrandizement.  Of course, we long time fans expect that. Though I suspect it might put off mainstream readers, who are at least part of the target audience for this book.
As I said above, the narrative can get somewhat ponderous, as when Morrison discusses his infamous "alien abduction" in Kathmandu, during which he was supposedly shown the true nature of reality by a bunch of fifth dimensional silver blobs.  This was actually part of the book I was looking forward most to reading.  However, before it was done I was waiting for Grant to get back to talking about writing Flex Mentallo, which, unfortunately, he never did.
Despite its over 420 page length, I burned through Supergods in under two days, and it would have been less if I hadn't taken time out to go to my job and sleep.  That is due, I suppose, not only to my intense interest in both of the books main topics, Grant Morrison and superheroes, but to the frenetic pace with which Morrison leads us through our journey of seven decades.  Though, as I said, the book gets bogged down when it should have been its most compelling, for the most part its an exciting and involving read.
If you're a fan of Morrison, I recommend this tome in no uncertain terms.  If you're not quite the Grant-o-phile that I am, its still worth reading.  If you're someone who doesn't read comics, but might be curious about them (or if you know such a person), I could think of worse places to start your journey into their 2D universe.
Posted by Ray "!!" Tomczak at 6:41 PM