All Their Ducks In A Row: Finger Awards Honor Steve Gerber and Don Rosa 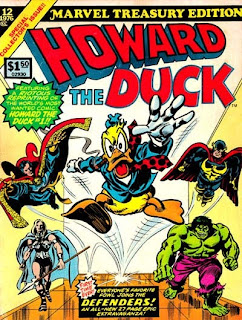 Never before in their nine year history have the Bill Finger Awards for Excellence In Comic Book Writing had anything approaching what you could reasonably call a "theme."  There is little, for instance, beyond the long decades they each spent toiling in the unforgiving vineyards of corporate comics, to link the work of last year's recipients.  Frank Doyle spent the bulk of his career relating the misadventures of amiable every-teen Archie Andrews for the company that bears that character's name, while the majority of Steve Skeates' professional output consists of super-hero comics produced for the likes of Charlton and DC.
This year however, the two recipients of the 2013 Finger Awards, who will honored in a ceremony at next weekends Comic-Con International in San Diego, are linked by a common thread.  Each is primarily known for their work with talking ducks.
An aside, before we go any further, for those of you reading this who may not be familiar with the concept and history of the Finger Awards.  I wrote a somewhat serviceable synopsis of the concept in my post about last years' awards, and, as I thus see no need to wrack my brain trying to reword it, I shall employ my computers copy and paste function to re-present it below:

Begun in 2005, the Bill Finger Award is the idea of veteran Batman illustrator and political cartoonist Jerry Robinson.  Its sort of a lifetime achievement award for the comics industry's journeyman creators. The recipients are writers who have built up a respectable body of work over a long career but never quite achieved super-stardom or racked up a bunch of flashy awards.  Each year two comics writers, one living and one dead, are chosen to be honored.
The selection is made by a committee of five comics professionals chaired by Mark Evanier... 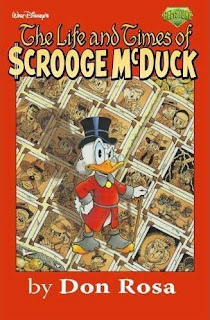 In another first for the finger Awards, Don Rosa is first recipients to have also drawn the stories he wrote.  (Although, as I mentioned last year, Steve Skeates is quite an adept cartoonist, it really wasn't his early 1990s mini-comics that earned him the Finger.)  From the late 1980s until his 2008 retirement, Rosa followed in footsteps of the legendary Carl Barks as the historian of Duckburg, chronicling the new adventures of Donald Duck, his nephews Huey, Louie and Dewey, and cantankerous billionaire waterfowl Scrooge McDuck.  His signature work--some might even say, if they wanted to be so grandiose and somewhat slightly pretentious, his masterpiece--remains the graphic novel The Life and Times of Scrooge McDuck, in which Rosa wove together the fleeting and ocassionally contradictory hints to Scrooge's past that Barks seeded throughout his many stories over the years into a coherent and compelling epic tale.
This year's posthumous honoree, Steve Gerber, enjoyed a four decade career in the comics industry spanning from the early 1970s until shortly before his death in 2008.  During that time he lent his unique voice and worldview to such titles as The Defenders, Omega the Unknown, Man-Thing, Stewart the Rat, Nevada  and Hard Time.  Gerber's most enduring, and endearing, contribution to American pop culture lies in his creation of a certain cynical, cigar smoking duck from Cleveland who goes by the name of Howard.
Both of these prolific and talented creators are richly deserving of this recognition. It's somewhat of a shame, though, that the Finger Awards didn't get around to honoring Gerber during their first three years, when he was still alive to enjoy it.
Posted by Ray "!!" Tomczak at 5:43 PM