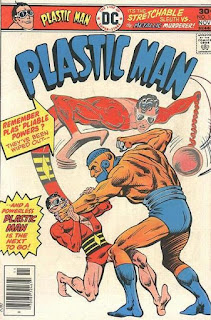 Plastic Man #15 from 1976 remains to this day one of my favorite comic books.  In that issue, written by Steve Skeates, Plas battles an a killer robot and an amnesiac dressed as a giant carrot.  The name of the diminutive West Coast based hired killer who sends the mechanized monster after the stretchable sleuth is "Rice" O'Rooney, The San Francisco Threat.  That name still makes me laugh every time I think about it.
Two decades later I published my first small press comics and joined a couple of small press "co-ops".  These were clubs for small press publishers who traded comics with each other and contributed columns to the club's newsletter.  One of these groups folded shortly after I joined.  I believe I only got one issue of the newsletter.  This was enough to allow me to start up a correspondence with one of the other members, who turned out to be the very same Steve Skeates who had written Plastic Man #15, as well as many other comics, of course, twenty years previously.  At first, I wasn't sure it was the same guy.  It seemed hard to believe that someone who'd been at the top of the comics profession as a writer for DC would now be self-publishing obscure photocopied mini-comics. (I was much more naive in my youth.)  But if it was, I knew I couldn't pass up a chance to get to know him a little bit.
I sent him my somewhat amateurish attempts at a humorous action/adventure comic and in return he sent me a series of surreal, silly, and slightly philosophical mini-comics that he drew himself in a wonderfully loose and simple cartoony style.  While I might at first have viewed mini-comics as a step down for him, these comics were actually, in many ways, superior  to his mainstream work.
They were accompanied by somewhat rambling letters filled with  anecdotes and reminiscences, as well as constructive criticism, advice and encouragement.  I was thrilled that the writer of one of my favorite comic books actually seemed to like my work. 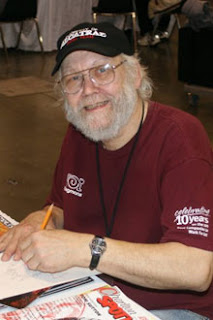 Recently, I learned that Steve Skeates is to be honored with the Bill Finger Award For Excellence in Comic Book Writing during the Eisner Award ceremonies at this year's Comic-Con International.
Begun in 2005, the Bill Finger Award is the idea of veteran Batman illustrator and political cartoonist Jerry Robinson.  Its sort of a lifetime achievement award for the comics industry's journeyman creators. The recipients are writers who have built up a respectable body of work over a long career but never quite achieved super-stardom or racked up a bunch of flashy awards.  Each year two comics writers, one living and one dead, are chosen to be honored.
The selection is made by a committee of five comics professionals chaired by Mark Evanier, who himself could be a candidate for the prize.
This year's other recipient of the Bill Finger Award is Frank Doyle, long time writer for Archie Comics who passed away in 1996.
Unfortunately, its been quite some time since I've written to Steve.  I'll have to drop him a line through Facebook and offer my congratulations for this great achievement.
Speaking of Facebook, thanks to Matt Dembicki for alerting me to this bit of news by posting about it there.
Posted by Ray "!!" Tomczak at 7:33 PM