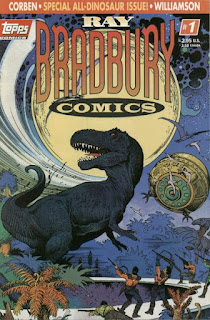 After I posted my previous entry here this evening, I was taking a look at the blogroll over in the sidebar and noticed that two separate blogs had recent posts entitled "Ray Bradbury."  I clicked on one of the links, fervently hoping that this didn't mean the only thing that it possibly could mean.  Reading the post, however, confirmed my fears.
Ray Bradbury died last night.  He was 91 years old.
Bradbury was, as I'm sure you know, the author of, according to the obit in the Los Angeles Times, 27 novels and over 600 short stories, among them Fahrenheit 451, The Martian Chronicles, The Illustrated Man,  and Something Wicked This Way Comes, and many others.  The short story "A Sound of Thunder" is a personal favorite and, in my opinion, the best time travel story ever written.  Many of his most famous works, including all of the ones I listed above, have been adapted for television, movies and comic books.
To say that Bradbury was a great writer of science fiction is to do a grevious disservice to the man and his legacy.  Consider the opening paragraph of Fahrenheit 451:

It was a pleasure to burn.

It was a special pleasure to see things eaten, to see them blackened and changed.  With the brass nozzle in his fists, with this great python spitting its venomous kerosene upon the world, the blood pounded in his head, and his hands were the hands of some amazing conductor playing all the symphonies of blazing and burning to the bring down the tatters and charcoal ruins of history.  With his symbolic helmut numbered 451 on the his stolid head, and his eyes all orange flame with the thought of what came next, he flicked the igniter and the house jumped up in a gorging fire that burned the evening sky red and yellow and black.  He strode in a swarm of fireflies.  He wanted above all, like the old joke, to shove a marshmallow on a stick in the furnace, while the flapping pigeon-winged books died on the porch and lawn of the house.  While the books went up in sparkling whirls and blew away on a wind turned dark with burning.

That, my friends is simply great writing period.  Its that kind of literary prowess that makes me wonder when I read it why I even try to write when never in a million years will I ever produce anything that painfully good.
I met Bradbury once, extremely briefly, back in 1993 or '94, I'm really not sure which, at Marcon, the science fiction convention held each spring here in Columbus, Ohio.  I make no claim to have actually gotten to know the man or anything.  In fact, I can't remember whether there was any conversation at all between the two of us.  I simply watched as he scrawled his name on a piece of paper I had given him then handed it back to me.  Then I quickly moved out of the way to allow my fellow autograph seekers their turn.  I'm sure that I at least thanked him.  Still, I will always consider it an honor just to have been in his presence.
It goes without saying that Ray Bradbury will be greatly missed.  Yet, as long as the grim future he envisioned in Fahrenheit 451 remains but a distant nightmare, as long as books continued to be printed, sold and read, he and his work will always be with us.
Posted by Ray "!!" Tomczak at 7:42 PM