So, what exactly is the point of reviewing comics from Free Comic Book Day?  The big day was a few weeks ago, and those comics aren't widely available right now, so its not like I can urge you to go out and grab your own copy if you didn't already.  However, FCBD comics are essentially promotional items whose intent is to get you to start following an ongoing monthly series or perhaps to interest you enough to invest a huge chunk of change in a hardcover reprint of some obscure but supposedly "classic" old comic.  Therefore, the rating system I shall employ here shall be simply "buy" or "don't buy" based on whether I would for a second consider laying out the cash for the item being flogged by the free comic.  Of course, there are degrees of "don't buy", there being comics that I would consider checking out of the library if I ever get around to paying off my heavy fines, and books that I wouldn't give a second look to. 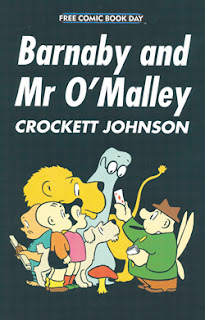 I almost wish I'd been alive back in the early 1940's so that I could have followed Crockett Johnson's wonderful classic comic strip Barnaby, chronicling the misadventures of an adventurous and mischievous little boy named, of course, Barnaby and his bumbling but well-intentioned fairy godfather Mr. O'Malley, when it first ran in newspapers.  I've seen very few examples of the strip, but have loved what little I've been able to get my hands on.  That includes Fantagraphics' FCBD offering,Barnaby and Mr. O'Malley, which includes the first two strips, featuring the meeting of the two principles, and the beginning of a long storyline in which Barnaby, his friend Sally, and Mr. O'Malley set out to investigate mysterious goings on at a supposedly haunted old house and find it occupied not only by a ghost who happens to be an aquaintance of O'Malley's but also by gangsters who are using it to stash the loot from the coffee shipments they've been hijacking.  These gems are but a taste of the first of five hardcover volumes to be published annually over the next five summers reprinting the entire ten year run of the strip.  I'm going to rate this one a "buy".  Sure, each volume's probably going to cost something like forty or fifty bucks, and I might not be able to afford it right away, but I'm definitely going to have to seriously consider picking up at least one of them at some time in the future.
By the way, you might recognize the art style in the cover image up above. After Barnaby, Johnson went on to write the children's book Harold and the Purple Crayon and its several sequels, which are every bit as delightful as his comics work. 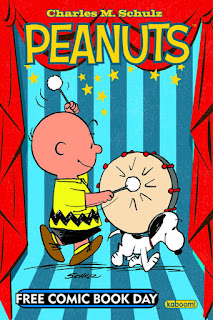 Though there is precedent for it--Dell published Peanuts comics in the 50's and 60's, many of them drawn by Jim Sasseville, Charles Schulz's assistant on his short lived second strip It's Only A Game--the idea of Peanuts material being produced by anyone but Schulz seems today almost like sacrilege.  The strip was not just his life's work, it was his life, and when it ended, so did he.   That's why the preview of the new Peanuts book from Boom Studios kids imprint Kaboom is definitely in the "don't buy" column.  The writers and artists of the new material do a somewhat passable job of imitating Schulz's style of art and humor, but when they are presented alongside classic strips by the man himself, it becomes sadly obvious that something is missing, and that something is Schulz's soul.
The flip side of the book is a preview of Kaboom's Adventure Time series.  While I can see the appeal of the series to some people, it's not really my cup of tea.  Again, it's a "don't buy", at least for me. 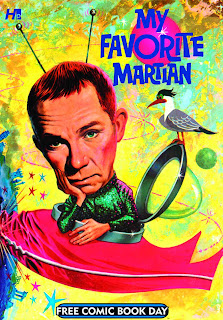 Hermes Press, an outfit I'd never heard of before, offered up My Favorite Martian, reprinting an issue from Gold Key's adaptation of the fondly remembered 1960's sitcom featuring Ray Walston as the titular extraterrestrial "Uncle Martin" and Bill Bixby as the only Earthling privy to Martin's true nature, which ran fifteen issues, a long time by Gold Key standards, with most of their TV adaptations lasting only three or four issues, if that.  The story, "Destination Mars", tells of Martin's efforts to hitch a ride back home on a NASA space probe bound for the Red Planet.  It's actually a lot better than I expected from a Gold Key TV based comic.  The art is by veteran comics illustrator Dan Spiegle.  He doesn't quite capture Walston and Bixby's likenesses, though he gets it close enough that you can tell who they're supposed to be.
This is a teaser for Hermes' hardcover reprinting of the entire series.  I wouldn't mind reading more, but I'm not sure I'd want to read it more than once, and I don't really want to spend fifty bucks on something I'm going to read once and then sell to Half Price Books.  So, My Favorite Martian: The Complete Series is a "don't buy", though I would check it out of the library.
I hit several stores on Free Comic Book Day and came away with nearly a dozen free comics, so this is just the first of several parts.  In the next installment, I'll look at free comics from DC, Bongo, and Bluewater.
Posted by Ray "!!" Tomczak at 5:20 PM