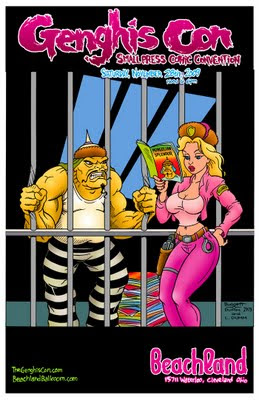 For as long as I've lived in Columbus, up until two years ago, the weekend after Thanksgiving meant Mid-Ohio Con, then the new owners of the show, having no respect for tradition, went and moved it to the first weekend in October.  This year, however, if you're really missing going to a comics show that weekend, you can head over to Cleveland and check out the first, hopefully annual, Genghis Con on Saturday, November 28 at the Beachland Ballroom.

Actually, this show sounds to be less like MOC, with its emphasis on mainstream and super-hero comics and  special "media" guests, and more akin to Columbus' own Small Press and Alternative Comics Expo, or SPACE, which features independent and self-published creators hawking the work they have poured their hearts into.

Now, I'd be telling you  about show anyway, 'cause it looks to be a pretty good one, but it just so happens that I just got an e-mail from GC promoter Scott Rudge, and my humble request for a table, for which Rudge is charging not one red cent, has been accepted.  I'll be riding down with fellow exhibitor and SPACE organizer Bob Corby, armed with copies of my books reprinting the first two years of my strip, Wasted Potential, which I will once again attempt to foist on the unsuspecting comics readership.

A little more info on the con is in the official press release below, and here's an article that  appeared in the Cleveland Plain Dealer. Then, of course, there's the show's web-site.

You won’t find Superman, expensive back issues or fading Hollywood celebrities at Genghis Con, a comic book convention organized to showcase the work of independent artists and writers from the . The event will be held at the Beachland Ballroom on Saturday, November 28, 2009 from 12:00 noon to 6:00 pm. The convention will feature the talent of approximately 50 graphic storytellers from around the whose work does not fit into the normal perception of what a comic book should be.

Comic readers are familiar with such natives as Brian Bendis, Brian Vaughn, Fred Van Lente, Harvey Pekar and Jeff Smith. These and many others from around the are the modern personalities shaping graphic storytelling as we know it today. The common thread through each of these current and rising stars of the industry is they began their careers creating and publishing their own material.

Like their famous brethren, the participants of Genghis Con use skill, imagination and craftsmanship to create engaging, original graphic storytelling art. Their work, however, remains largely unpublished outside of the creator’s own trips to the local copy center. Genghis Con exists to bring this creative talent together in one place and to provide a venue for interaction with potential readers who may not have any other opportunity to see this work.

The organizers of Genghis Con are committed to creating an event which is unique in many ways. Early in the planning stages, the convention organizers decided to break most of the rules of a normal comic convention. These changes include eliminating the dealer’s room and the endless rows of fading TV celebrities. Perhaps the most radical difference is participants will not be charged for table space as they are at other comic conventions. The organizers feel this will free the artists from feeling the pressure to “make up their costs” and allow them to focus on promoting their work.

"We are not doing this to make money,” says Scott Rudge, one of the Genghis Con organizers and owner of Astound Comics in . “We want the creators to use the money they save on renting space to offer inexpensive copies of their work. This benefits both the artist and the audience in a way not seen at a typical comic con. We want those attending the convention to feel comfortable interacting meaningfully with the creators and we hope to do that by making the communication of ideas as inexpensive as possible.”

To further break down the barriers between the artists and readers, Genghis Con attendees will be able to build their own comic book containing the work of each artist at the show. This book will be included at no additional charge with normal admission of $5.00.

“We are looking for creators who use a comic book style format to tell their stories, but we also have accepted some ‘zine and poster artists,” says Rudge. “While we may have some of the next generation of mainstream stars displaying their work, we are also looking forward to offering the work of those who have no interest in promoting their material beyond the desire to simply tell a story.”

The call is out for artists wishing to participate in Genghis Con. Artists are welcome to submit samples of their work for consideration. The organizers of Genghis Con will be accepting submissions until November 15th. For complete details and submission guidelines, creators should go to the event website, www.thegenghiscon.com.

Email ThisBlogThis!Share to TwitterShare to FacebookShare to Pinterest
Labels: conventions, events, In The Media, independent/alternative/small press comics, my comics