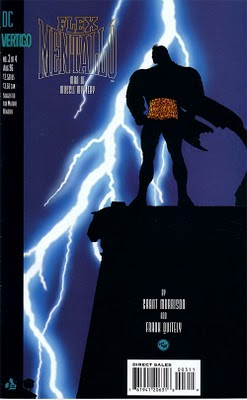 Here we go with the second installment of my look back at some of the highlights of the final decade of the twentieth century in the world of funny books. As I explained in my last post, the whole thing began when I e-mailed some friends of mine a link to a list of Worst 90's Character Revamps which featured such gems as Azbats, Electric Blue Superman, Zombie Punisher and Alien Shapeshifting Guy Gardner.  (Personally, I would have found a spot on the list for Heroes Reborn, especially Rob Liefeld's execrable Captain America relaunch.)  This led to responses labeling the 90s  "...the worst decade EVER..." for comics and "..sad."  As the guy who initiated this round of 90s bashing, I felt that it was thus my duty to point out that were actually some good comics published during that decade, and I compiled a list of over fifty titles.  In the first part of this post, I covered the independent, self-published and small press books of the era, and today I turn my attention to the "big two," DC and Marvel.
Actually, since there are so many DC books I want to talk about, I'm going to concentrate on those today and come back later with a, sadly, much shorter post on Marvel in the 90's.
While it was the "artists" (and I put that in quotes because I'm talking about the likes of Liefeld and Todd McFarlane here) who captured the headlines in the 90's, though more for their career moves than what they drew, the real story was that some of the best writers in the history of the medium were doing some of the best work of their careers during that era.
Though begun in 1988, the bulk of Neil Gaiman's Sandman appeared during the 90s, and, in my not so humble opinion, the series really did'nt hit its stride until 1991 and the Season of Mists storyline.
Another "mature readers" title that would go on to form the foundation of the Vertigo imprint upon its launch in 1993 was Peter Milligan's bizarre and thought provoking re-imagining of Steve Ditko's Shade, The Changing Man.
Once Vertigo got underway, Milligan, with artists Ted McKeever and Duncan Fegredo, respectively, contributed the haunting and disturbing The Extremist and Enigma, during what I call his "E Phase".
Although it would be Preacher that would make stars of writer Garth Ennis and frequent artistic collaborator Steve Dillon, my favorite work of theirs remains their run on Hellblazer. 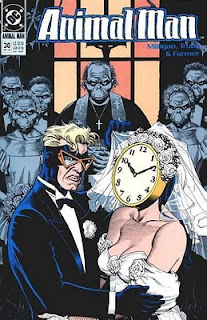 This looks like a good place to talk about Grant Morrison, my all time favorite comics writer, who, while still doing outstanding work today, produced his finest comics during the 90s.  He wrapped up his meta-fictional treatise on comics, writing, and animal rights, Animal Man, in 1990, by which time he had begun writing Doom Patrol.  (Morrison's run on Animal Man, by the way, was followed by an equally excellent, and just as bizarre, six issue stint by Peter Milligan.) Taking over from writer Paul Kupperberg, who had devolved the World's Strangest Heroes into just another X-Men rip-off, Morrison produced a hecticly paced, surreal adventure into the truly bizarre depths of the DC Universe.
And speaking of Hellblazer, as I was above,  when Ennis' predecessor Jamie Delano took a three-issue break, Morrison turned in an indescribably odd two parter in issues 25 and 26.  This was followed by an issue written by Neil Gaiman. I haven't read that one, but I've heard a lot of good things about it.
Anyway, back to Morrison. His first works for the Vertigo imprint were the graphic novel The Mystery Play, painted by Jon J. Muth, and the three issue mini-series Sebastian O, set in a Victorian London where computers and virtual reality already exist.   Then he set out on his longest and most ambitious work, the sometimes confounding, often confusing, but always fascinating The Invisibles. In 1996, he re-visited a character he had created for Doom Patrol for a four issue meditation on old comic books and the nature of reality, Flex Mentallo, which, despite, or perhaps because of, its almost impenetrable weirdness, is my favorite work of his.
In an interview with Timothy Callahan that appears in the book Grant Morrison: The Early Years, Morrison says, "...you can see me re-engaging with super-heroes in the Flex Mentallo series."  This prepared him to jump headfirst into the mainstream DC Universe in JLA.  Just as he had with Doom Patrol, Morrison took the Justice League of America back to its roots, turning out epic tales of the World's Greatest Heroes struggling against truly cosmic scale threats.
Other notable Morrison works from the decade are the five part Batman: Legends of the Dark Knight arc "Gothic", and the Vertigo one-shot Kill Your Boyfriend.
Before I head back to the mainstream DC Universe, one more early Vertigo book worth mentioning is the prestige format one-shot Mercy by J.M. DeMatteis and Paul Johnson. This also looks like a good place to slip in Kyle Baker's over the top satire Why I Hate Saturn, which these days appears under the Vertigo banner but was originally published by now defunct DC imprint Paradox Press.
The decade in super-heroes at DC began with Gerard Jones giving us what is perhaps the best Hal Jordan (note that I did not say Green Lantern) story ever in Green Lantern (vol. 3) #'s 1-8, a story titled "The Road Back" for its trade paperback release. In fact, this may be the only story ever to really deal in-depth with Hal Jordan as a character rather than an archetype. Jones' work on another Green Lantern title, Green Lantern: Mosaic, featuring John Stewart, offered up some of the oddest stories published by DC during the 90's outside of the Vertigo line. 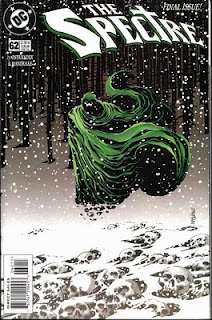 If Grant Morrison is my favorite writer, then John Ostrander is a very close second.  As the 90's opened, he was writing Hawkworld, at first with Tim Truman, then solo, following up Truman's three issue mini-series redefining Hawkman and making the character interesting for the first time in his history.  In 1992, Ostrander embarked on what I consider his best work, The Spectre, with artist Tom Mandrake. In both of these series, Ostrander writes the kind of comics that Denny O'Neil tried to do, but, it must be said, didn't quite pull off with Green Lantern/Green Arrow back in the 70's, combining super-hero action and thought provoking social commentary. (The GL/GA stuff, as good as it was, often got a little preachy at the expense of the super-heroic action, which Ostrander rarely did.)  Other Ostrander projects from the decade include the anti-gun one-shot Batman: Seduction of the Gun and the twelve issue The Kents, which traced the history of Clark Kents foster family and is, to date, one of the very few thing Ostrander has written for DC to be collected in trade paperback.
The acclaimed team of writer Jeph Loeb and artist Tim Sale came together during this time, beginning the decade by radically revamping  a classic Jack Kirby creation in The Challengers of the Unknown Must Die, continuing on through a series of Batman: Legends of the Dark Night Halloween specials, and wrapping up the decade with Batman: The Long Halloween. 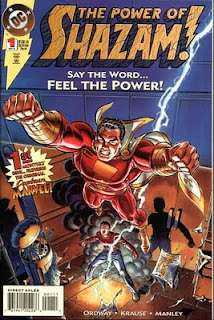 Though better known as an artist, Jerry Ordway wrote the best version of the original Captain Marvel that DC has published since they aquired the character in The Power of Shazam!
Beginning in 1996, James Robinson turned out a fascinating look at the legacy of one of DC's oldest heroes and its somewhat reluctant inheritor in Starman.
Then there's Warren Ellis, who gave us the eye-popping "wide-screen" super-heroics of The Authority and the allegorical future shock tale Transmetropolitan.
On television, the 90s brought us Batman: The Animated Series, one of the best versions of the character, not to mention one of the greatest adventure cartoons ever done for TV, and the tie-in comic, The Batman Adventures was a highlight of DC's comics line.
That's all for now, folks. Next time, I strain hard to find a handful of Marvels worth remembering.
Posted by Ray "!!" Tomczak at 6:21 PM