This week DC releases a new trade paperback called Batman: King Tut's Tomb, collecting the story arc "A New Dawn" from Batman Confidential #'s 26-28 and padded out by reprints of some older Batman stories, including Batman #353 and a couple of old issues of The Brave and the Bold.
I have no intention of buying this.
That's because I picked up the core Batman Confidential issues back in September, not too long after they first appeared.  Since that was before I started this blog, I shared my thoughts about the story in a news post on my Wasted Potential site.  If you're not a regular reader of my comic strip (and why the bloody hell aren't you?), then you haven't had the chance to read my insightful review.  Therefore, I re-present it below:
"A New Dawn"
Batman Confidential #'s 26-28
by Nunzio DeFilippis & Christina Weir
art by Jose Luis Garcia-Lopez and Kevin Nowlan 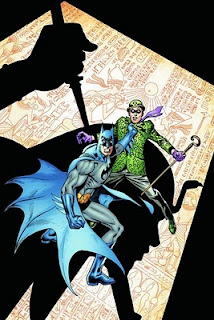 I was really looking forward to reading this story, but I was also prepared to be mightily disappointed by it.
I was looking forward to it because this is a story that I have wanted to see for years. I've always wished someone would take King Tut, one of the silliest villains created for the Adam West Batman show, and bring him into the comics as a serious, and even a bit scary, threat for the Caped Crusader.
A summary of the plot piqued my interest even more. Members of a museum's board of trustees are being murdered by a man dressed as a pharaoh and spouting Sphinx-like riddles. Batman at first suspects the Riddler is involved, but they end up working together to catch the killer, since the Riddler is ticked off that someone has stolen his schtick.
And I was prepared to be disappointed because almost everything I've read from DC Comics in the past few years has disappointed me, especially the whole Identity Crisis/Infinite Crisis/52 cycle of crap. I haven't yet attempted to read Countdown or Final Crisis and I'm not sure I really want to put myself through that.*
The credits didn't give me much to go on, as I'd never heard of DeFilippis and Weir, but with Garcia-Lopez and Nowlan doing the art, I knew that the story would at the very least be beautifully drawn.
I was not disappointed, and, in fact, I haven't enjoyed a super-hero story this much in years. This is a classic Batman story that plays up the character's detective skills as he and Riddler race against time to figure out both the killer's identity as well as where and when he will strike next.
The story also does a wonderful job of giving us a serious version of King Tut who fits into the darker world of the Batman comics while retaining the essence of the character as established in the TV show. He is presented here, just as he was on TV, as an Egyptologist who gets bonked on the noggin and starts to think that he's the reincarnation of Tutankhamen, except that he's skinnier than the TV version as portrayed by Victor Buono and he actually kills people.
There are a lot of great moments and a few unexpected twists, as well a classic TV show style deathtrap cliffhanger, in this story, but I really don't want to say anymore or give away too much here, because if you are any sort of Batman fan you need to read this story yourself.
(*Update: I have, since I first wrote this piece, gotten around to reading Countdown to Final Crisis and Final Crisis. Countdown was not as bad as I was expecting, but that's probably because my expectations were so incredibly low after the ineffably awful Identity Crisis, Infinite Crisis, and 52. Final Crisis, on the other hand is pretty good. You'll especially like it if you've enjoyed previous Grant Morrison super-hero opuses such as JLA (particularly the "Rock of Ages" storyline), All-Star Superman, and especially Flex Mentallo. (Check out my post on DC comics of the 90's for my feelings about Flex)
Posted by Ray "!!" Tomczak at 5:16 PM