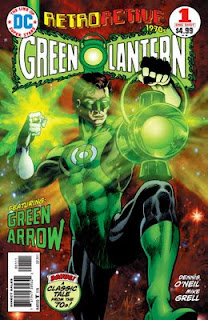 What you are reading now is my second attempt at writing a review of DC Retroactive: Green Lantern--the 70's.  I really wanted to write a positive review, but I realize that was based more on my affection for the characters and for writer Dennis O'Neil than on the story at hand, which was, to tell the truth, fairly unimpressive.
Before I get to writing about the new story, I want to waste a paragraph or two bitching about the reprint in the back of the book.  When I saw what story had been selected, my first thought was, "Green Lantern #76? Again? Seriously?"
As I've noted before, "No Evil Shall Escape My Sight" has to be one of the most reprinted super-hero stories ever.  It's certainly one of the most reprinted DC stories.  The most recent reprint was just a couple of months ago in Showcase Presents Green Lantern Volume 5.  Does DC really think that anyone who would be interested in the Retroactive books doesn't already own a copy of this story or has at least read it?
I would have preferred to  see a lesser known and perhaps never before reprinted story spotlighted.  Since the new story was drawn by Mike Grell, it might have been nice to see a story from the period when he was drawing the regular Green Lantern title. Actually, that would have been more appropriate as the new material is closer in tone and structure to those later issues than to the "Hard Traveling Heroes" era of social relevance drawn by Neal Adams.
In 1976, when Green Lantern was rescued from four years in limbo with issue #90, Green Arrow was still on board as cover billed co-star.  However, while they shared a magazine, the two heroes quite often did not share their adventures.  Instead, an issue might be comprised of two separate and unrelated stories of the two Emerald Crusaders.
Thus it is in "Nightmare Planet," with the two heroes going their separate ways for most of the issue, only getting together at the end to compare notes on their recent exploits.
Green Lantern's story has Hal Jordan coming to the aid of an alien whose ship has crashlanded in an unnamed hostile foreign country.  Meanwhile, Ollie Queen pursues a disturbed young man who is trying to prove his worth, apparently to both Green Arrow and his deceased father, by shooting people close to Ollie with a bow and arrow from long range, thus supposedly proving himself the superior archer.
Despite having chronicled the character's adventures for the entire decade of the 70's, O'Neil never quite seemed comfortable writing Green Lantern.  He seems far more comfortable with more "down to Earth" characters like Batman and Green Arrow.  Thus its no surprise that Green Arrow portion of the issue is slightly better than the Green Lantern arc.  Slightly.  Just.
The big problem with both stories is their ending.  The Green Lantern story seem to be attempting to convey a typically, for O'Neil, ham-fisted moral message about the savagery of the human race or something like that, but it is undercut by a ridiculous and unintentionally hilarious conclusion.  Green Arrow's story starts off strong, but comes to a rather abrupt and unsatisfying stop.  Perhaps if GA's story had had been given some of the pages wasted on the Green Lantern story, it might have turned into a good story.
The one good thing about the comic is the art of Mike Grell.  Still, that's not enough to make DC Retroactive: Green Lantern--the 70's worth the five buck cover price.
Posted by Ray "!!" Tomczak at 4:36 PM