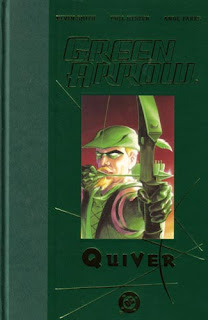 I'm going to kick off this overview of Green Arrow stories that have yet to be reprinted in trade paperback with a round up of what has been collected so far.  There's actually quite a bit available in TPB or hardcover, representing a significant chunk of the character's history.  There remain, however, many glaring omissions.
Green Arrow's Silver Age adventures, beginning in 1958 with the first story drawn by Jack Kirby and continuing on  through the landmark The Brave and the Bold #85, which introduced GA's goatee and new Neal Adams designed costume, are gathered together in one hefty volume as Showcase Presents the Green Arrow.  In addition, the Kirby drawn tales are presented in full color in the slim and affordable volume The Green Arrow by Jack Kirby.
In keeping with the current industry practice of rushing out a collected edition almost as soon as the last chapter of a story line or mini-series hits the stands, Green Arrow's most recent exploits, beginning with his resurrection by Kevin Smith in the "Quiver" story line, are all available in book form.  This includes the latest retelling of his origin by Andy Diggle and Jock in Green Arrow: Year One.  A collection of the first half dozen issues of the currently ongoing series is due out in the next couple of months.
Most of the "important" Green Arrow stories, that is the ones that are essential reading for an understanding of the character as he exists today, have been reprinted in at least one edition over the years.  These include B&B  #85, Justice League of America #75, in which he lost his fortune, and the acclaimed Dennis O'Neil/Neal Adams run on Green Lantern. 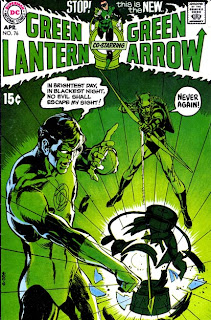 I would guess that Green Lantern #76, the first issue of the O'Neil/ Adams series, would be near the top of any list of most reprinted comic issues ever.  I have owned at least three different editions of the story in various forms over the course of my comics reading and collecting career.  These have included a mass market paperback reprinting issues #76 and #77, the two volume Hard Traveling Heroes trade paperback series, and the hardcover edition of The Greatest Team-Up Stories Ever Told.   Other reprintings include the first issue of the 1983 deluxe format mini-series that presented the entire O'Neil/Adams run, a slipcased hardcover edition of those issues in 2000, another TPB collection in 2004, and issues of the Silver Age Classics and Millennium Edition series which re-presented landmark issues from DC Comics' history.
The story is due to be reprinted yet again next month, leading off Showcase Presents Green Lantern Volume 5.   This volume will present the entire O'Neil/Adams run, after which the title was canceled; pick up with the series' revival in 1976 which carried on the series' original numbering from #90 with Green Arrow still sharing cover billing; and continue on to #100.  When, or if, there is a sixth volume in this series, GA will be a major part of that tome as well, as Hal Jordan did not regain his status as solo star of his own book until #123. 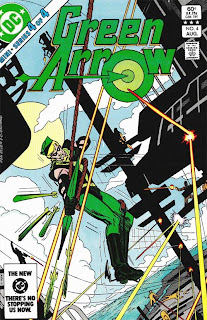 The major exceptions to the reprinting of milestone story lines are the 1983 mini-series by Mike W. Barr and Trevor Von Eeden and the story in which Oliver Queen was killed.  The mini-series doesn't make any significant changes to the character's status quo, and is mostly notable for being the first comic book actually titled Green Arrow, appearing some forty years after the character's debut.  Still, it's a fun and entertaining superhero mystery story that certainly deserves to be represented for new readers.  The actual issue in which Ollie gets blown up by terrorists is included in Green Arrow/Black Canary: For Better or For Worse, but the story line as a whole has yet to be collected. 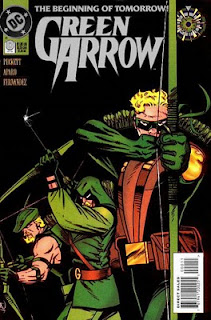 In fact, while The Longbow Hunters has long been available in trade paperback, the ongoing series that followed it remains out of print, except for a couple of issues included in For Better or For Worse and a team-up of Connor Hawke and Kyle Rayner included in a Green Lantern collection.  This includes not only the 80 issues written by Mike Grell, but the post Grell issues drawn by Jim Aparo as well as Connor Hawke's entire tenure as Green Arrow.  Two other Green Arrow mini-series written by Grell, The Brave and the Bold Volume 2 and Green Arrow: The Wonder Year are also MIA.
While I  believe, although I've never actually seen it, that there is an Archives edition of Golden Age Green Arrow stories, it is, if it even exists, only one volume.  The majority of pre-1958 GA stories are available only to those willing to pay the undoubtedly sky high price of the original issues.
While the upcoming release of Showcase Presents Green Lantern Volume 5 is a good start, the bulk of Green Arrow's Bronze Age adventures remain in reprint limbo.  This includes not only the remainder of his stint as Green Lantern's co-star, but also the back up stories from Action Comics, World's Finest Comics and Detective Comics.  The major exception to this, as I noted last week, is "Night Olympics" from Detective Comics #'s 449 and 450, which, while fairly unspectacular, has merited  several reprintings mostly due to the fact that it was written by Alan Moore.
Among the Action Comics stories are Mike Grell's first work on the character, which you would think would rate reprinting on that basis alone.  I'm sure however, though I've not read them, that they're good stories in their own right, as they were written by Elliot S! Maggin.
Nonetheless, despite the significant omissions noted here, which I hope will one be rectified, there's still plenty of  stories available in collected editions for the Green Arrow fan.
Posted by Ray "!!" Tomczak at 2:55 PM