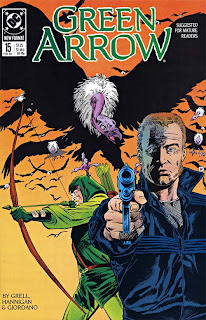 Well, not really.  But in the story "Seattle & Die" from Green Arrow (Vol. 2) #'s 15 and 16 Ollie does encounter a character who bears many striking similarities to Mr. Sable.  The story was, of course, written by Mike Grell and drawn by Ed Hannigan, Dick Giordano and Frank McLaughlin.
It seems that Oliver Queen and Dinah Lance, a.k.a. the Black Canary, just can't enjoy a nice quiet night on the town without without finding themselves smack dab in the middle of an attempted robbery.  Whether its costumed crazies like the Riddler in Kevin Smith's Green Arrow (Vol. 3) #12, or a trio of garden variety street crooks as in this story, trouble just seems to find the pair wherever they go.  Ollie and Dinah are attempting to enjoy the music at a Seattle blues club when said crooks appear and demand that the patrons turn over their valuables.  Being who they are, our heroes leap into action to thwart the robbers.  When one of them has his shotgun pointed at Oliver, a man who had been quietly drinking at the bar all night pulls his own gun and kills him and the other would be robbers.  Naturally, he splits the scene before the cops arrive.
Our heroes aren't so fortunate, however, though Ollie is less than co-operative with the police.  Ollie's decided to find the mysterious shooter himself and get his side of the story.  Green Arrow tracks the guy to a fleabag hotel and the two share a drink and talk.  However, the mystery man choses to remain an enigma and Ollie leaves without having really learned anything.  As Ollie drives away, he sees an explosion coming from the mystery shooter's hotel room.
Rushing back to the room, Green Arrow encounters two men who identify themselves as Gavin and Daryl, agents of ASIO, the Australian Secret Intelligence Organization.   After their quarry, aided by Ollie, escapes, the pair of agents accompany Ollie back to his place.  There they tell Oliver and Dinah a story that should give anyone who's read the origin story in Jon Sable, Freelance #'s 3-6 a strong sense of deja vu. 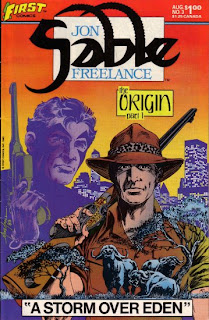 The mystery man's name is Jake Moses.  In a former life, Moses was a long jumper who had once represented the United States in the Pan American Games.  In 1978, he and his new bride, fashion model Alison Gardner, travel to Africa on their honeymoon.  On a photo safari, they encounter a group of rhino poachers who open fire on the safari group.  Gardner along with their guide and tracker are killed and Moses is badly injured.  Upon regaining consciousness, he stumbles upon the poachers and kills them.  As one of the ASIO agents says,"The killin' got in 'im, and he got good at it," He becomes a mercenary who would work for anyone who could pay his price.
The story told by the ASIO agents is more or less a Reader's Digest version of Sable's origin.  Moses himself is essentially a dark reflection of Jon Sable, lacking Sable's moral center or talent for writing children's literature.  Also unlike Sable, Moses is driven by guilt, blaming himself for his wife's death, and increasingly turns to alcohol in an attempt to deal with it. Similar to Deadshot as written by John Ostrander in Suicide Squad, Moses appears to have a death wish, and in the story's climax makes a suicidal leap off the roof of the latest sleazy hotel that Green Arrow and the Australians had tracked him to. His fate is left ambiguous as the story ends with an image of Moses in mid-leap silhoutted by a flash of lightning.
This story leaves me wondering two things.  The first is, of course, what ever did become of Jake Moses.  The second is what a meeting between Green Arrow and the real Jon Sable might be like.  We'll probably never get a definitive answer to either question, though it's always fun to speculate.
Posted by Ray "!!" Tomczak at 2:47 PM