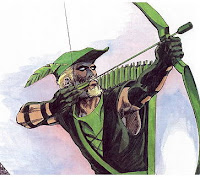 (The second part of my series on the various versions of Green Arrow's origin story over the past seven decades of the character's existence picks up with Mike Grell and The Longbow Hunters, the 1987 mini-series that redefined the character as an urban hunter.  The first part of the series covered the Golden Age origin, Jack Kirby's Silver Age origin and Green Arrow's first mini-series from 1983.  You can read that by clicking here.)
In 1987, Mike Grell crafted a new version of Green Arrow's origin for The Longbow Hunters that suited his more realistic, less super-heroic take on the character.  He later expanded upon it in 1989's Secret Origins #38 and the four issue mini-series Green Arrow: The Wonder Year, published in 1992. Grell envisioned Oliver Queen as being in his early forties and having been active as Green Arrow for about two decades.  Thus, The Wonder Year  takes place in the turbulent presidential election year of 1972. 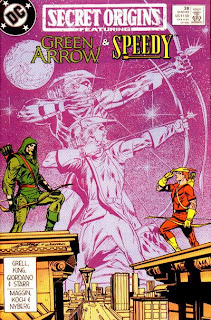 On a friend's yacht, enjoying what he declares to be his first vacation in six years, a drunken Oliver Queen falls overboard and finds himself the next morning on the shores of a deserted and uncharted island.  In order to survive, he teaches himself to hunt and shoot a bow and arrow.  Where Grell's version differs significantly from all past and future versions is that on the island, Ollie uses only regular pointed arrows.  The trick arrows came later, after he had returned to civilization and adopted his Green Arrow identity.
After stumbling upon a couple of stoners who are growing pot on the island, Ollie captures them and uses their boat to return home.  He turns them over to the police, but doesn't stick around because he doesn't want to get involved.
Returning to work, he finds himself increasingly bored and dissatisfied.  Later, he is attending a charity masquerade ball dressed as Robin Hood, when he foils an attempted robbery.  The next day, the local newspapers dub him "Green Arrow."  Deciding that his little adventure had been fun, he begins his career as a costumed crime fighter, despite not being too happy with the name he's found himself saddled with by, as he puts it, "...a reporter with no sense of style." 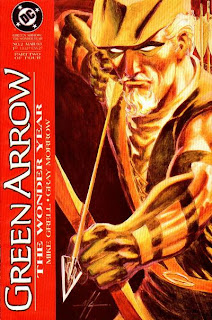 Soon, he becomes involved with a former girlfriend who is at the center of a plot to assassinate a presidential candidate.  At one point, he allows men who'd been trying to kill them to escape, despite Brianna, the ex-girlfriend, urging him to shoot them.   "I'm no killer," he protests.
"You will be...someday," she retorts.  "You keep carrying that bow around and sooner or later you're going to have to use it...for real."  Inspired by this insight, he begins to develop his array of trick arrows.
The most recent revision of Green Arrow's origin occurred in 2007's six issue mini-series Green Arrow: Year One, written by Andy Diggle, with art by Jock.  In stark contrast to Grell's somewhat more realistic and down to earth take on Ollie's beginnings, Year One is the widescreen, big budget, summer blockbuster movie version of the story.  It is loud--or would be if it were a movie--action packed and exciting. 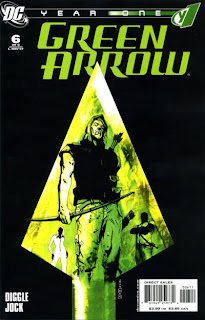 The story begins by introducing us to shallow, self centered, thrill seeking and heavy drinking young billionaire Oliver Queen.  Soon, he is betrayed by his security chief Hackett, whom he had considered a friend but was actually working with drug queenpin Chien Na-Wei, aka "China White" in a scheme to steal billions from him. When Ollie tumbles to the scheme, Hackett knocks him out and tosses him off his own yacht into the ocean.  As in all the other versions of the origin, Ollie finds himself on an island where he fashions a crude bow and arrows and hones his natural talent for archery in order to survive.
However, this time the island is not quite as deserted as in previous tellings.  In fact, it just happens to be the headquarters of China White's whole operation.  She has enslaved the native population, forcing them to grow her  genetically modified opium poppies.
Armed with only a bow and a few improvised trick arrows, Ollie manages to pretty much singlehandedly take down an army of desperate criminals, destroy China White's entire operation and free the native population.  The grateful natives give him the name "Auu Lanu Lau'ava," which, in their language, means, as you've probably guessed, "Green Arrow."
Improbable, even preposterous, as it is, Green Arrow: Year One is, nonetheless, the currently "official" version of the origin of Green Arrow.  You can be assured, however, that in a few years, changing times or changing creative teams will dictate yet another retelling and re-imagining of Ollie's early days for yet another generation.
Posted by Ray "!!" Tomczak at 1:27 PM