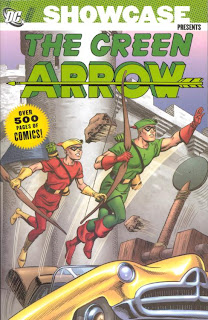 Showcase Presents Green Arrow  collects the Emerald Archer's Silver Age adventures in one five hundred thirty page black and white volume.  Beginning with the first  Green Arrow story illustrated by Jack Kirby, the book brings together stories from World's Finest and Adventure Comics with Green Arrow's early appearances in The Brave and the Bold with his initiation into the JLA in Justice League of America #4.
We've all heard it said that prior to his revamp in B&B #85, Green Arrow was a Batman wanna-be without much of a personality.  That's true as far as it goes.  Like Bruce Wayne, Oliver Queen is a millionaire with a youthful ward who fights crime along side him.   All the faux-Bat accoutrements are on hand, as well, including the Arrow Cave, the Arrow Car, the Arrow Plane and the Arrow Signal. As far as the lack of personality goes, to be fair, most of  these stories were only eight pages long and it is hard to squeeze a complete story and characterization into that short a space.  The stories themselves tend to be formulaic and a bit repetitive.  There are two separate stories in here where GA meets a circus clown who parodies the archer in his act.  Of course, those stories were originally published several years apart and the writer probably never foresaw that they would end up collected in a book together.
What imagination did go into these stories seems to have been mostly directed to coming with the wide array of trick arrows that Green Arrow and Speedy, and occasionally their female counterpart Miss Arrowette, use to help them catch the bad guys. There were, of course, the ubiquitous net, and handcuff arrows as well as the infamous boxing glove arrow.  Among some of the more unusual were:
In one story, the Battlin' Bowmen take to sea equipped with an "aqua bow" and special aqua arrows that include:
Coming from Miss Arrowette's quiver are:
Then there's the stuffed cat arrow.  But that really deserves a post of its own.

In the final analysis, for what they are, which is basically short adventure stories meant to entertain kids for a few minutes, these stories really aren't bad.  They also feature some pretty good art.  After the Kirby issues, most of the stories are drawn by Lee Elias.  Elias started his cartooning career as an assistant to Milton Caniff, and the Caniff influence is clear in the characters' faces and Elias' use of shadow.  Other artists represented include original GA artist George Papp, Mike Sekowsky on the JLA issue, and Neal Adams on the groundbreaking B&B #85.
Overall, this is a volume that I would recommend to any fan of Green Arrow or Silver Age Comics in general.
Posted by Ray "!!" Tomczak at 2:48 PM