And Now A Word From Our Sponsor...

What pops into your mind when you think about ads in comic books?  If you've only started reading comics in the last decade or so, it's most likely slick full page ads for video games.  But if, like me, you are a child of the Bronze Age, the images that come to mind are pages of ads for cheap novelty items, Charles Atlas bodybuilding courses and, of course, Hostess pastries.  Anyone who writes about the comics of the Bronze Age will eventually have to address those ubiquitous Hostess ads.  They are an essential part of what made the comics of the era so special and so fondly remembered today.  In fact, I would go so far as to say that, with their outlandish stories and silly villains, these ads were basically quintessential Bronze Age comics boiled down to one page.
The ads, which ran in DC and Marvel comics for about a decade beginning in the early 70's, featured the company's super-heroes in one page adventures that inevitably involved Hostess Cupcakes, Twinkies or Fruit Pies.  The hero most often would use the treats to distract the villains long enough to allow them to be captured.  There were also ads that appeared in Harvey Comics featuring that company's characters, but, like the books in which they appeared, they are far less memorable.
The biggest portion of the DC ads featured the original Superfriends quartet of Superman, Batman, Wonder Woman and Aquaman.  Green Lantern, Flash, Hawkman, Batgirl and Captain Marvel starred in a couple of adventures each, and villains the Joker and Penguin even got into the act.  There were also a trio of ads starring some of DC's lesser known, less popular heroes such as Red Tornado, Plastic Man, and Green Arrow.
In his adventure, presented below, GA uses Fruit Pies to distract a group of kids from the fact that they are seconds away from falling to their deaths, while he works to prevent that from happening.   Then, as required by the conventions of these ads, he ends the adventure with a terrible pun.
I have no idea who might have written this ad, but it's glaringly obvious that it was drawn by Curt Swan, who did quite a few of the DC ads. 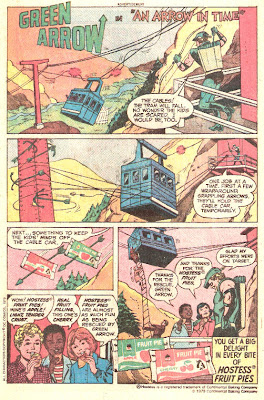 (Click on the ad to be able to read it)
We know return you to your regularly scheduled blog, already in progress.
Posted by Ray "!!" Tomczak at 1:42 PM