The Past Ain't What It Used T'Be: The Evolving Origin of Green Arrow (Part One)

(NOTE: This look at the changes in Green Arrow's origin stories is another of those long rambling posts covering several decades of comics history that I have a tendency to write when I've got too much time on my hands and nothing better to do.  Thus, I shall be dividing it into two parts.) 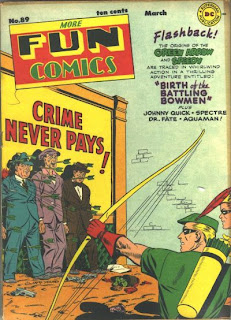 It's a bit of a cliche to speak of super  hero comics as modern mythology, but you know what they say about why cliches are cliches.  Central to  any hero's myth is his origin story.  Like the myths and legends of old, there are often many different versions of a hero's origin as is it occasionally tweaked or completely rewritten to fit the needs of the story at hand, the changing times and tastes of the readers or the approach of the current creative team to the character.
In 1992, John Byrne, writing in his editorial column "A Flame About This High" in the letters  pages of John Byrne's Next Men #1, stated that "Origins are a fairly recent convention, as comics go."  It is certainly true that during the Golden Age of the 1940's, many super heroes leapt right into crimefighting without stopping to explain to the reader why they did so or where their powers, if they had any, came from.  Even Batman, who these days can't seem to go a single issue without flashing back to his origin, wasn't granted a backstory until several months after his initial appearance.  Many characters of this period didn't last long enough to even have an origin, disappearing after just one or two outings.   Green Arrow was one of the lucky ones.  Not only was he was popular enough with readers to stick around, but  the editors apparently considered him a sufficient drawing card to warrant his taking over the covers of More Fun Comics within months of his debut.  Still, it wasn't until 1943, nearly two years after his initial appearance, that he was finally provided with an origin.  This occurred in a story entitled "The Birth of the Battling Bowmen," the lead feature of More Fun Comics #89.
According to this version of events, Oliver Queen was a wealthy collector of Native American artifacts who, after his collection is destroyed in a museum fire, is told by a friend of a "gold mine" of such relics at a place called Lost Mesa.  Some criminals who overhear this conversation and think it is about an actual gold mine head to Lost Mesa  to get the gold before Queen can.  Living on Lost Mesa are a boy named Roy Harper and his faithful Indian companion Quoag, who had been stranded there years before after a plane crash that killed Roy's father.  After the criminal gang kills Quoag, Queen and Harper use their archery skills to defeat them.  Queen then takes Harper in as his ward and the two decide to continue fighting crime as the Green Arrow and Speedy, taking the names from remarks made by the criminals on Lost Mesa.  Prior to Crisis on Infinite Earths, this story had come to be considered the origin of the Earth-2 Green Arrow.  For all I know, it may be once again, now that the Multiverse and Earth-2 have been reinstated following Infinite Crisis and 52. 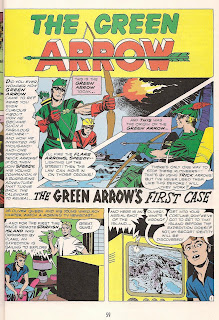 Fifteen years later, Ed Herron and Jack Kirby crafted a totally different origin story in "The Green Arrow's First Case" which appeared in Adventure Comics #256. After falling overboard during a sea voyage, millionaire Oliver Queen  washes up on Starfish Island, which, as the name implies, just happens to be shaped like a starfish for no reason that has anything to do with the story.  While stranded there, he makes a bow and teaches himself archery in order to survive, fashioning a variety of trick arrows to help him perform various tasks. Eventually,  a freighter anchors itself off shore. Swimming out to it, Oliver discovers that the crew has mutinied.  After using his archery skills and trick arrows to thwart the mutineers, Ollie hitches a ride back to civilization.  Upon his return, he continues using his new found mastery of archery to fight crime as the Green Arrow. 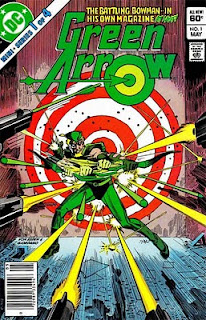 A revised version of this origin appeared as a part of a flashback sequence in the debut issue of Green Arrow's first ever eponymous mini-series in 1983 written by Mike W. Barr and illustrated by Trevor Von Eeden and Dick Giordano.  When his girfriend dumps him, Oliver Queen takes a cruise to help him escape the pain of his broken heart.  He gets more of an escape than he bargained for when pirates raid the ship and toss him overboard.  He eventually finds himself on a deserted island where he builds himself a bow and several trick arrows and teaches himself to shoot in order to survive.  Eventually,  the very same pirates who stranded him there come to the island to stash the loot from their latest act of piracy.  Ollie captures them using his newly developed archery skills and trick arrows.  Upon returning to civilization, Oliver decides to use these skills to fight crime in Star City as the Green Arrow.
As you can see, Barr altered a few details from the Herron/Kirby story,  such as changing the mutineers to pirates and making them the reason for Ollie being on the island.  By the way, the  island isn't given a name in this or any of the subsequent future retellings and re-imaginings of the origin and is not depicted as having any unusual or distinctive shape.  The motivation for Ollie being on the ship in the first place is important in that the girl who broke his heart all those years ago naturally comes back into his life in the course of the mini-series.
(That brings us to about the halfway mark of this overwrought essay, so I'm going to give my fingers a rest from typing and pick this up later.   In part two, I look at Mike Grell's take on Green Arrow's beginning and get to the current "official" version of the classic origin as related in Green Arrow: Year One.)
Posted by Ray "!!" Tomczak at 2:59 PM