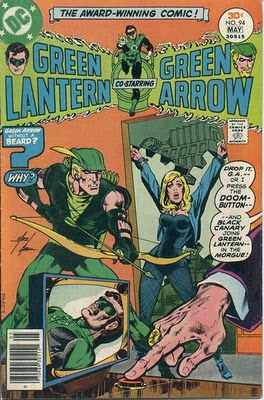 This cover, drawn by Mike Grell for Green Lantern #94, is notable, to me, at least, for the question mark shaped cover blurb floating in the air by Green Arrow's right elbow.  It reads:

"GREEN ARROW WITHOUT A BEARD? WHY?"
When I first bought this issue, as a ten year old in 1977, the blurb attracted my attention, yet while, even then, I did think it kind of an odd thing to emphasize, I didn't find anything else especially noteworthy about it at that time.  Back then, I had only read a few Green Arrow stories and was unaware of the character's history, either within the fictional DC Universe or as a fictional character in the real world.
In 1977, Green Arrow had been around for 36 years.  For most of that time, up until Brave and the Bold #85 in 1969, he had been clean shaven.  When I look at that cover today, I'm struck by how, in such a relatively short time, the beard had become such an integral part of the character's iconography that the editors of Green Lantern thought that its absence was sufficient hook to get someone to pick up the issue.  You must also take into account that back then, the comics industry was still working under the assumption that most of their readers were young children and that the readership turned over about every five years.  Thus, the blurb appears to be aimed at readers such as I was at the time, that is, kids who'd recently discovered comics  in general, and Green Arrow in particular, and didn't know that Oliver Queen hadn't always had that beard.
The industry, and the audience, has changed a lot in the thirty four years since this issue hit the stands.  Such a blurb might not be as effective today with an older audience more aware of the histories of these characters and the fictional universes they inhabit.   On the other hand, by this point in time, Ollie has had the beard for over forty years, far longer than he went without it, so its absence today would be even more noteworthy than it was in 1977, especially to long time GA fans.
Posted by Ray "!!" Tomczak at 2:27 PM