Green Arrow Helps "The Cop Who Lost His Nerve"

When I posted about Showcase Presents Green Arrow, I dropped a reference to a story featuring a "stuffed cat arrow" and mentioned that it deserved a post of its own. My friend Mike Carroll, whom I encountered while I was leafing through that volume at the comic shop just prior to purchasing it, appeared to believe that this one six page story alone was reason enough to justify spending seventeen dollars on a five hundred page book.  I wouldn't go that far.  There are plenty of reasons to buy the book, many of  which I covered in my previous post.  However, it is one of the quirkiest and most original of Green Arrow's Silver Age adventures. 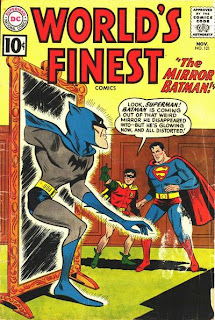 Originally published in World's Finest Comics #121, "The Cop Who Lost His Nerve" is the only Green Arrow story written by long time Flash and Green Lantern writer John Broome,  and is drawn, as are the bulk of the stories in the Showcase Presents volume, by Lee Elias.  Broome and Elias team to introduce us to Fred Jenkins, whom the opening caption describes as "...the top rookie on the police force--the most promising patrolman ever to walk a beat."  Later, Green Arrow recognizes him as having been "...top student at the Police Academy."  However, we are also told that Jenkins has "...a terrible secret" that threatens his future on the force.
Green Arrow and his ward Speedy first encounter Jenkins when they are summoned by the police, via the Arrow Signal, to deal with a robbery in progress.  When they arrive, they at first conclude that their super heroic services won't be needed after all, as Jenkins has apparently captured the perpetrator.  However,  Jenkins becomes paralysed with fear when a cat suddenly appears seemingly out of nowhere, allowing the thief to make a break for it. Fortunately, GA and Speedy are still on the scene to capture the crook using their boomerang arrows.
After the Ace Archers deliver their prisoner into the hands of the authorities, Jenkins confesses his "terrible secret" to them.  As a child, Jenkins had been badly injured and almost killed in a terrible automobile accident.  Just before losing consciousness, the last sound he heard was the meowing cry of a cat.  Since that time, he has had a paralyzing fear of felines.
Jenkins' revelation is overheard by a hood called Weasel.  Weasel takes this information to a crook named Artie who immediately begins to plan how he  can use it to his advantage.  While this is taking place, back in the Arrowcave, Green Arrow is preparing a special arrow to help Officer Jenkins.
The next night, Fred comes across some suspicious looking characters carrying a sack and loitering in front of the Sports Museum after hours.  When he questions them, they literally let the cat out of the bag.  When the rookie officer once again becomes frozen with fear, one of the thugs grabs his gun.  Just as this is occuring, GA and Speedy happen by in the Arrowcar. Suddenly, there's a loud "ME-EE-EOW" and another cat leaps out of nowhere,  knocking the gun out of the crook's hand.  Fred recovers from his paralysis, retrieves his firearm and aids Green Arrow and Speedy in capturing the gang.
In the next to last panel, Green Arrow is shown holding what appears to be a cat with an arrow sticking out of its butt.  (...and where else but in a blog about comics would I ever get an opportunity to write a sentence like that?)  He explains that the cat which attacked the crook was actually a dummy attached to an arrrow.  The meowing was produced by a fluted arrow fired by Speedy.  GA had reasoned that the way to cure Jenkins' fear of cats was to arrange for a cat to save his life.   The logic of that sounds a little shaky to me, but it works.  The story ends with the now cured rookie petting the very cat the criminal gang had sicced on him earlier.
Now retired, former police officer Fred Jenkins lives by himself in a trailer with three dozen cats and a ferret named Speedy.
Posted by Ray "!!" Tomczak at 9:01 AM