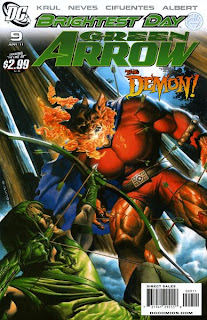 In the interest of getting the unpleasant part out of the way as quickly as possible, I'm going to kick off Green Arrow Month 2 by reviewing the latest issue of the current Green Arrow monthly series.  I picked up #9 last week just to see if the series was still as bad as it started out last year.  Of course, I could have saved myself the three bucks by simply looking at the cover and seeing if J.T. Krul was still the writer.  I'll give Krul the benefit of a doubt and concede that he may, in fact, be capable of writing a decent comic book story.  It appears, however, that said story would not be one featuring Oliver Queen.
For those of you who've wisely avoided the Arrow's latest adventures, let me hit you with a little set-up before we get to the review.  After killing the villain Prometheus for destroying a huge chunk of Star City at the end of Justice League: Cry for Justice, Ollie turned himself over to the authorities to stand trial.  Found not guilty by a sympathetic jury of Star City residents, Ollie was nonetheless ordered by the judge to leave Star City and never return.  In Brightest Day #0, a magical forest suddenly sprang up in the devastated area in the center of Star City.  Defying the court order, Green Arrow returned to Star City and took up residence in the forest.  Since then, he has been joined by "Knight of the Forest" Galahad, who may, or, of course, may not, be the Galahad of the Camelot legends.
As Green Arrow #9 begins, GA and Galahad have, in turn, been joined by Etrigan the Demon and Jason Blood, magically separated by the power of the forest, and the Phantom Stranger.  This issue is marginally better than the first couple, but that is damning with faint praise, as the poets would say. Issues #1 and #2 were ineffably awful, whereas #9 is simply terrible.
By the way, speaking of poets, J.T. Krul is most definitely not one.  His dialogue for Etrigan is clunky and has no flow or rhythm whatsoever. Maybe he should have gotten Dan Mishkin and Gary Cohn to write some limericks for the Demon, as they did in Blue Devil Summer Fun Annual #1 back in 1985.  Then at least something in this issue would have been worth reading.
After spouting some lines that I suppose are meant to be cryptic but come off more as simply utterly nonsensical, the Stranger bows out.  He contributes nothing and I'm not sure what the hell he was even there for. Compounding the problem is the fact that artist Diogenes Neves draws the Stranger without ears.  I know that the Stranger's face is traditionally shrouded in shadow, but in Neves' rendering it doesn't just appear as if you can't see his ears, but as if he doesn't have any.  In the final panel of page three, the Stranger looks like one of those grey aliens you used to see meeting with the Presidential candidates in The Weekly World News, but with a hat.  Other than that, though, the art isn't all that bad. Not great, but not bad, either.
After the Stranger splits, Etrigan's evil begins to infect the forest, causing it to turn dark and attack Ollie, Blood and Galahad.  As they struggle to protect the White Tree at the heart of the forest, Galahad is swallowed up by an evil tree and Arrow find himself battling giant magical spiders.
That last paragraph perfectly illustrates my whole problem not only with this issue, but this entire series so far.  The premise is all wrong for Green Arrow.   I could certainly see Ollie taking the Robin Hood schtick to its logical extreme and hanging out in a forest, but not a magical forest populated by demons and giant spiders.  Green Arrow is a character who works best in more down to earth settings and stories.  Not to mention the fact  that the stories are just plain bad.  I know I've said that several times over the course of this post, but it seems I just can't emphasize enough what a mess DC has made of Green Arrow over the course of the last year.
Posted by Ray "!!" Tomczak at 1:22 PM