Green Arrow in The Brave and the Bold (Part 4): Volume 2 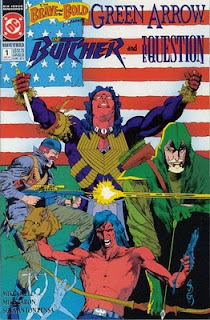 Nearly a decade after the end of the original The Brave and the Bold, DC revived the venerable title as a six issue mini-series written by Mike Grell and Mike Baron, drawn by Shea Anton Pensa and Pablo Marcos and featuring Green Arrow, the Question and the Butcher.   The story has no title other than The Brave and the Bold and the individual issues are simply identified by chapter number.
GA and the Question teamed up several times during Grell's tenure, but I believe that this is the only of those meetings that Grell actually had a hand in writing. Ollie and the Butcher act as if they've met before.  If you're unfamiliar with the Butcher, that's understandable.  The character, created and owned by Baron, made only a handful of appearances in the early 90's.  Previous to B&B vol 2, he debuted in an eponymous mini-series, then appeared in a two part illustrated text story in the pages of Ms. Tree Quarterly. Following this series, he was never seen again.  He did get an entry in Who's Who, which describes him as "free lance spook" John Butcher, Lakota Indian and former Army Ranger and CIA operative.
As the story begins, Green Arrow stumbles upon a Native American separatist movement with apparent ties to the Irish Republican Army which Butcher has infiltrated.  The Question becomes involved while investigating the murder of lumber baron Owen Hester, who was scalped in an apparent attempt to implicate Indians in the crime, as reporter Vic Sage. Together, the trio uncover a plot to foment a Native American uprising at a Mohawk reservation in Montreal.  The man behind the plot is revealed to be part Indian British Lord Sir Arthur Youngblood, head of the conglomerate that owned Hester's company.  His plan is that the uprising will cause the Canadian government to shut down the reservation, allowing him to swoop in and claim the land for a massive industrial and residential development project.  Naturally, of course, Green Arrow, the Question and Butcher unravel the plot, publicly expose Youngblood's duplicity and save the reservation.
A couple of years later, in an editorial in Shaman's Tears #1, editor Mike Gold wrote :


"...perhaps we should have reconsidered that Brave and Bold series when we knew it wasn't working out.  No knock on Mr. Baron; he did excellent work.  The idea was a good one, but no matter how hard we tried, Grell's style and Baron's style just didn't mesh." 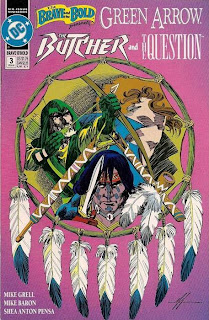 Though it starts off well enough, the story never does quite gel.  Butcher  himself says in the story, reporting back to Sage and Ollie after attempting to infiltrate and gain intelligence on the Indian uprising, that he discovered "Bits and pieces, but they don't quite make a whole," which sums up the series better than anything I could could come up with.
While Pensa does a fine job on most of the faces and figures, his backgrounds are a bit crude and blocky.  I'm not a big fan of the way he draws Ollie, specifically, Ollie's beard and mustache.  He uses squiggly lines that just don't look right to me. It also seems that Pensa had some trouble making deadlines.  That's just conjecture, but it would explain why Pablo Marcos steps in to draw #5 and inks Pensa, who had handled the first four issues solo, on the final installment. At least in #6 Green Arrow's beard looks right.
In the time honored Brave and the Bold tradition, there are apparently some continuity issues surrounding this series.  According to the DC Data Base entry for Charles Victor Szasz (a.k.a. Vic Sage or The Question), because Butcher was a creator owned character who is no longer part of the DC Universe, it is "unclear" whether the events of this story still fit into continuity.
Posted by Ray "!!" Tomczak at 3:00 PM