Thoughts On A Comic I Haven't Actually Read

I considered picking up DC Retroactive: The Flash--the 70's, mostly since, not owning a lot of Flash comics and none from the 70's, I figured that the reprint included, unlike the ones in the Green Lantern, Superman and Justice League volumes, would be one I didn't already have.  No such luck, however.  It turned out that the reprint was of DC Comics Presents #2. 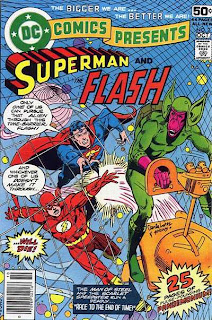 This seems like an odd choice for a couple of reasons.  The main one is that DCCP was a Superman book.  It was DC's second and most successful attempt at creating a Superman team-up, after briefly converting World's Finest Comics to that format in the early part of the decade, and Flash was the guest star in the debut two parter.  That's another reason this seems like an odd choice, as it is the conclusion of a two part story.  However, back in the 70's most DC comics were written with sufficient recaps of previous issues that the story can be read and understood on its own.  Finally, there's the fact that "Race to the End of Time" was written not by longtime Flash scribe Cary Bates, who wrote the new lead story, but by Martin Pasko.  Of course, this sort of balances out the fact that the reprint in DC Retroactive: Superman--the 70's, accompanying a lead story by Pasko, was written by Bates.
Still, "Race to the End of Time", along with "Chase to the End of Time" in DCCP #1, is one of my favorite Superman stories by Pasko and well worth reading if you haven't already.  However, I'd recommend getting the trade paperback that was released a few years ago containing all of Superman's races with the Flash, which includes both parts.  (That's if you're just interested in the older tale, of course, as I note in the title of this post, I haven't actually read the new story, so I can make no recommendations as to whether its worth reading, though reviews I've read on other blogs have been quite positive.)
Bates, of course, was the logical, in fact the only, choice to write a 70's Flash story, as he wrote the character's title for the entire decade.  It seems to me that when comics fans talk about long runs by writers on a single series, such as Chris Claremont's sixteen years on Uncanny X-Men or Peter David's twelve year stint on Incredible Hulk, Bates' fourteen year run on Flash is hardly ever mentioned. Perhaps that's because, unlike Claremont and David's runs, which brought their respective titles to new heights of popularity, Bates' tenure ended with the book's cancellation and the title character's death.  Still, that era seems to be fondly remembered by fans today and fourteen years doing anything is an achievement worthy of some recognition.
Posted by Ray "!!" Tomczak at 8:09 AM