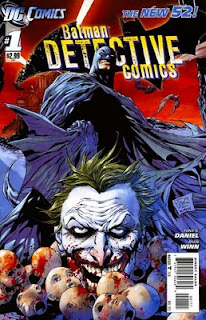 Detective Comics #1 is, if not the worst Batman comic ever, at the very least the worst that I have ever had the deep misfortune to have read.  From the laughably bad narrative captions on the first page to the repulsive image on the final page, the combination of idiotic plot, bad writing and poor art make reading this book a painful experience.
Writer/artist Tony Daniel's misguided attempt at writing a tough guy internal monologue for Batman goes awry almost immediately, lapsing into unintentional self-parody with this groaner, "His modus operandi changes with the wind....
"...and it's been windy in Gotham City."
Later, Batman delivers this gem, "I've always been in Gotham.  I AM Gotham."  That's actually presented as dialogue, yet Commissioner Gordon, to whom he is speaking, surprisingly neither bursts out laughing nor backs away slowly from the sort of madman who would say something insane like that.
Daniel even dishes up tired cliches such as "I own the night," and even has Batman actually think at one point, "I'm Batman."  Thanks for telling us, Tony, as if by that point in the story we hadn't already figured it out for ourselves.
Why not "I'm the Goddamned Batman?"  After all, it seems as if Daniel is trying to imitate Frank Miller, but the only Miller Batman comics he's actually read are All-Star Batman and Robin or maybe Spawn/Batman.  At least All-Star can be read as Miller parodying the very type of Batman story he himself inspired with  The Dark Knight Returns, which actually makes it somewhat less unbearably awful, but there is no hint of irony whatsoever in Daniel's deep purple prose.
Truthfully, the art isn't completely awful.  The biggest flaw is that familiar characters are rendered virtually unrecognizable.  Commissioner Gordon looks like he's wearing a bad wig and fake moustache, while Harvey Bullock doesn't even look human.
The issue ends with the introduction of a mysterious new villain called the Dollmaker, but, as you've probably guessed, I shall not be coming back for future issues to discover what his invariably lame criminal scheme might be.
Posted by Ray "!!" Tomczak at 10:33 AM