Thoughts on "Before Watchmen" and the "Relevance" of Moore and Gibbons

So, since I appear to be back in blogosphere for the time being, let us continue the grand Gutter Talk tradition of coming late to the party and take a look at some of the events that transpired during my self imposed hiatus. 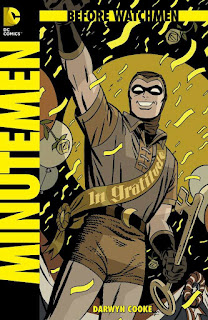 The biggest and most controversial news of the past couple of months has undoubtedly been DC's announcement of the Before Watchmen project, a series of prequels to Alan Moore and Dave Gibbons' groundbreaking 1987 graphic novel Watchmen.
Unlike some, I have no real moral or aesthetic objection to the existence of these prequels.  I most likely won't buy or read any of them, however.  If I did, it would probably be only the Minutemen mini-series written and drawn by Darwyn Cooke, because---I did mention that it was written and drawn by Darwyn Cooke, right?  Well, then, there ya go.
Nor do I fear that the very existence of these books will somehow taint my enjoyment of the original.  I can still watch and enjoy my favorite film, Casablanca, despite having read the prequel/sequel novel As Time Goes By, even though that book was, to be honest, not really very good at all.
What does stick in my craw in some of the hype surrounding the project is the suggestion by DC execs and others connected with the project, such as J. Michael Straczynski, who has been the most vocal of the bunch on this point, that these books are necessary because the Watchmen characters need to be reinvented or reinvigorated in order to keep them "relevant" for an imagined new generation of readers, or some such corporate weasel public relations doublespeak BS.  To my ears, such an assertion seems to carry with it the implication that Moore and Gibbons' work has somehow become irrelevant.
This couldn't be farther from the truth, of course.  Let us consider a few facts.  For instance, the fact that Watchmen has never gone out of print; that it remains to this day one of DC's top selling graphic novels; that people continue to read, reread and discuss and analyze it; that the movie, no matter what you may think of it, even got made after more than two decades; and that the announcement of Before Watchmen has spawned such emotion and impassioned argument; all of which speak quite eloquently to the issue of  the continued relevance of Watchmen, as does, for that matter, the very fact that DC even considered publishing Before Watchmen.  After all, you don't see them tripping over themselves to do a sequel to The DC Challenge, do you?
No, Watchmen is not a book that needs to be reinvented or made relevant.  It is, however, one of the few true masterpieces of comics literature and, as such, a work that DEMANDS to be read.  If you haven't already, I highly suggest that you do so.
More on Watchmen coming soon, but first I let you read my e-mail in "The Miller Dialogue".
Posted by Ray "!!" Tomczak at 5:12 PM