Watchmen and the Human Condition

Its been--what--three years now since the Watchmen film came out, right?
Anyway, it was about that time, maybe a month or two before the movie's release date, that Max Ink and I were discussing the comic.  In particular, we were debating the view of human nature put forth by Alan Moore in the book. 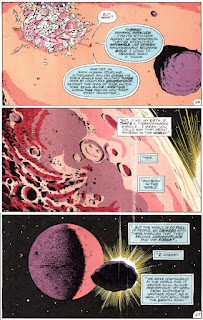 The discussion found me attempting to argue that Watchmen presented a more hopeful and optimistic view of humanity and its future than the bleak outlook that Max seemed to see in the comic.  Reflecting on this, it almost seems as if the sides should have been reversed.  Certainly no one who knows Max, either personally or even just through his work, especially on Blink, would accuse him of being a cynic.
Anyway, despite my best efforts, which pretty much merely amounted to citing Dr. Manhattan's "thermodynamic miracle" speech at the end of chapter 9, which is one of the most moving  and inspiring passages I've ever read, I failed to make my case in a manner that convinced even me.  I'm not that good at arguing off the top of my head.  Most of these posts, the better ones at least, ferment in my head for a few days before I sit down at the keyboard.  This particular one has been knocking around my brain for a week now.
The reason that this three year old conversation came back to me is that someone has come along and made the case that I was trying to make back then.  In the conclusion of his four part analysis of Watchmen at tor.com, Timothy Callahan responds to a remark made by Darwyn Cooke, writer and artist of the upcoming Minutemen mini-series, in an article about the "Before Watchmen" series of prequels to Watchmen.
Addressing what he sees as the graphic novel's "pervasive darkness", Cooke said, "I’d consider it a masterpiece if it had been able to have found what I would refer to as a hopeful note."
This prompted Callahan to write, "As flawed as [the] characters, and their world, may be, I can’t imagine an interpretation of Watchmen that doesn’t recognize its inherent hopefulness. It presents a world prepared for global nuclear war, and the war is averted....in the end, Dan Dreiberg and Laurie Juspeczyk are together, living happily ever after....Viedt’s preposterous plan has worked. Millions have died so billions might live.  Harsh as it may be, there’s a hopefulness there....To read it any other way, particularly as some kind of justification for profiting from working on sequels, that’s the cynical act."
I've just excerpted enough of what Callahan to give the gist of his meaning, but you really should follow the link above and read the whole thing.  His review of Watchmen, by the way, is part of his year long "Great Alan Moore Reread", in which he will be taking a look at all of Moore's major works over the course of 2012. He just finished up Watchmen last Monday, and so far has covered V for Vendetta, Swamp Thing and Moore's Superman stories, among other early works. In today's column, he tackles Moore's Vigilante two parter, his two short Omega Men back-up stories and the Green Arrow story "Night Olympics". (If you're interested, you can check out my take on "Night Olympics" here.) It's definitely a series worth following.
Posted by Ray "!!" Tomczak at 4:11 PM

Email ThisBlogThis!Share to TwitterShare to FacebookShare to Pinterest
Labels: Around the Web, artists, Before Watchmen, comic books, DC, Dredging Up The Past, old comics, super-hero, trade paperbacks and graphic novels, upcoming comics, writers