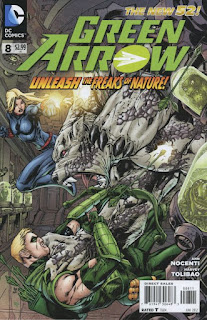 Overall, the last couple of issues of the relaunched yet again Green Arrow weren't as bad as I thought they'd be.  That's not to say that they were good, you understand.  It's just that I expected them to be a lot worse.
Previous to her taking over as writer of Green Arrow, I'd read only one other story by Ann Nocenti, where she introduced the character of Typhoid Mary in Daredevil, and I was, to say the least, less than enthralled by her writing.  In fact, it was pretty awful.  The big problem with that arc was the dialogue, which was all written in the same voice.  I could read you a random passage from the story and you would be unable to tell whether it came from Daredevil, Karen Page, the Kingpin or a caption.  The whole thing read more like an essay than a story.  Her run on that book is generally well spoken of these days, but based on what I've read, I can't see why.
But this isn't a review of a thirty year old Daredevil story, but of the current Green Arrow arc.  Nocenti  hasn't quite developed an ear for naturalistic dialogue in the intervening years.  It comes across as slightly less "written" than in Daredevil, but still not anything you could imagine real people saying.
The plot involves Green Arrow being seduced and kidnapped by genetically engineered triplets who finish each other's sentences and go by the collective name of Skylark.  He is taken to an Arctic retreat where he meets the Skylarks' father, an albino man-beast named Leer who performs experiments on the local wildlife in order to prepare them to survive some sort of coming disaster.  It comes off as kind of a weird cross between King Lear and The Island of Dr. Moreau that has yet, two issues into a three issue arc, to coalesce into a coherent story. 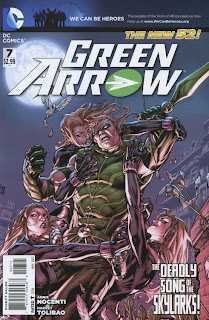 Slightly more interesting is the subplot involving the struggle for control of Queen Enterprises after Oliver Queen is presumed dead when the Skylarks crash his jet.  This plotline, at least, makes sense.
Perhaps my biggest problem with the new series as a whole is the title character.  I'm not really all that crazy about this new guy calling himself Green Arrow.  This is definitely not the same Ollie Queen who was re-invented by Denny O'Neil in the 70's.  He's shallower, more reckless and impulsive, and, frankly, not as smart.
Part of it may be the way Nocenti writes him, which really emphasizes the character's many bad points.  He was slightly more tolerable in the preceding arc by Keith Giffen and Dan Jurgens.  Still, even then, he wasn't the sort of hero whose adventures I'd really want to follow over the long term.
I was planning on waiting 'til next month, when Nocenti's initial arc was finished, to write this review.  Issue #7 was intriquing enough to get me to come back for the next one, but after reading the mess that is #8 I think I'll spend my three bucks on something else the first week in May.  The same goes for every subsequent month, at least until a new writer decides to have Ollie grow up a little.
Posted by Ray "!!" Tomczak at 10:06 AM