It's Max Ink's World--We're Just Livin' In It

Dig, if you will, a picture:
(I quote Prince just to be different.  Let's face it, the Twilight Zone quote most people would have used, "Submitted for your approval..." is such a cliche, although it is somewhat appropriate.)
There I go again, getting off topic before I've even gotten on topic.  Ok, enough of that.
Anyway..
Let's just say you happen to be leafing through a comic while you happen to be standing in one of the locations that figures heavily in the story.  At the same time on the stage, a musician who appears as a character in that selfsame comic is performing the very song he is depicted as performing in the story and comes to the lyrics quoted in the text at the exact same moment that you are  reading them.
Ok, so that didn't happen to you, but it did to me, and it's a good thing I was only halfway finished with my first beer or my head might have exploded.  Of course, it could have happened to you had you been at Wild Goose Creative on Friday evening for the party marking the release of Max Ink's latest comic, Blink: Wonka Wonka Kochalka.   The event capped a month during which the  original art from WWK had been on display at Wild Goose. 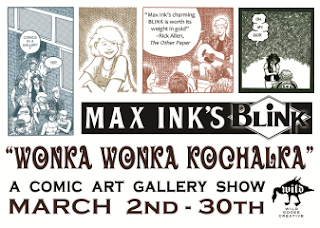 The performer referenced above was Jason Quicksall.  He led off a line-up of musical acts that also included Elijah Aaron, the Saturday Giant, and the Psychotic Blondes, a.k.a. Bree Frick and Molly Winters, who, I am told, are two of the three members of a group called the Salty Caramels.
Another highlight of the evening was the raffle of two envelopes filled with gift certificates from local comics shops as well as custom T-shirt maker Skreened totalling $95 in value.  Coincidentally, $95 was also the amount raised by the raffle, with all proceeds going to benefit Wild Goose Creative.
Wonka Wonka Kochalka is merely the first chapter (of 13) of Max Ink's next Blink graphic novel to be entitled So It Goes. (By the way, the first book in the series, So Far, took second place in the General category for the 2011 SPACE Prize, to be presented at this year's show)  If you didn't get a copy Friday, it's currently available on Amazon.  No doubt it will also be available at several comic shops in the Columbus area, and you'll have another opportunity to buy it from Max himself later this month at SPACE.
Posted by Ray "!!" Tomczak at 3:47 PM