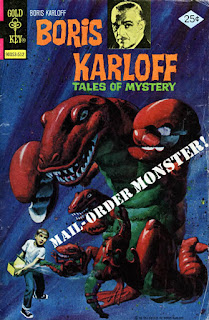 Like their Star Trek comic, Gold Key's Boris Karloff Tales of Mystery is another TV show adaptation that far outlived not only its source material, but its star as well.  The series began life as Boris Karloff Thriller, and was based on Thriller, the short lived horror anthology hosted by Karloff, that aired on NBC from 1960 to 1962.  Gold Key was a little late to the game with their adaptation, which debuted with an issue sporting an October 1962 cover date, which means it probably hit the spinner racks in either July or August, when the final episode of the TV show had been televised the previous April.  Nonetheless, the comic continued, becoming Tales of Mystery with #3 and lasting until 1980, publishing a grand total of 97 issues.
Each issue featured four short stories, with Karloff, as he had on TV, appearing at the beginning of each tale to give a short introduction.  However, unlike the TV show, he reappeared at the end of the stories to deliver a punchline, in the tradition of such comic book horror hosts as The Crypt Keeper and his many imitators.  Like some of those other horror comic hosts, Karloff would often be drawn in a costume reflecting the story he was introducing, such as a sombrero for a story set in Mexico or ancient Egyptian headgear for a story about a pharaoh's tomb or a caveman's loincloth for a story involving dinosaurs, whereas on TV he basically wore the same drab black suit every week. Even though Karloff died in 1969, the Gold Key series still bore his name and his avatar continued his hosting duties for the entirety of the comics' run.
A little while ago, I came across a quartet of issues from relatively late in the run in one of the clearance boxes at the North High branch of Half-Price Books priced at a quarter apiece and promptly scooped them up.
The stories are pretty tame, even by the standards of Bronze age horror.  At that time, even though the Comics Code had been somewhat relaxed at the beginning of the 1970's to allow depictions of "classic" monsters such as vampires, mummies and werewolves, bringing about a wave of horror titles that included Tomb of Dracula and Swamp Thing, it was still restrictive enough to prevent any so-called horror comic from being truly horrible.  Despite the fact that Gold Key comics did not carry the Code's stamp of approval, they still adhered to its tenets.  Thus, there is nothing in any of these comics that would give any but the most sensitive of children any sleepless nights.
Since I recently posted about the exhibit at Wild Goose Creative of art from the Sunday Comix anthology A Bowl Full of Happiness, which featured comics inspired by the ads for Sea Monkeys that used to run in comics from the Silver and Bronze Ages, I'm going to spotlight an issue from late 1975, #65, which cover featured a tale entitled "The Mail-Order Monster," also clearly inspired by those same ads.
"The Mail-Order Monster" is the third story in the issue.  The lead story is "The Pharaoh's Zoo" in which two archeologists uncover the long buried site of Pthager, the "summer residence of the Pharoahs" and the eponymous Pharoah's zoo, which houses a collection of mythological beasts such as Cerberus and the Phoenix who are held in suspended animation until awakened by the modern day interlopers.
The second story is "No Thing Is My Enemy."  A young boy plants mysterious seeds borne to Earth by a meteorite that crashes near his isolated farm that quickly grow into an intelligent creature that the boy mistakenly takes to be hostile.
At last we come to the cover story, "The Mail-Order Monster." Young Bobby Ryder sends away for "Sea Monster" eggs, which he attempts to conceal from his parents, who have commanded him to stop ordering so much crap through the mail.  However, it soon becomes impossible to keep his purchase a secret when one of the eggs, apparently planted among the others by aliens as an "experiment", grows into a gigantic silly looking lobster monster.
While there are no credits on any of the stories in this issue, the Comic Book Data Base lists Jose Luis Garcia-Lopez as one of the pencillers.  Garcia-Lopez is one of my favorite artists and, based on my familiarity with his style, its rather obvious to me that his contribution is to the issues final story, "Don't Put It On Paper," though it is obviously some of his earliest work. The story tells the tale of  Professor Mendez, who travels to the remote village of the Xota Indians in Mexico to create an alphabet for their previously unwritten language.  However, when he writes down the natives' word for the devil, he inadvertently summons forth the demon.
While the stories are by no means great, or even all that good, for that matter, Boris Karloff Tales of Mystery still provides a healthy dose of decidedly campy fun.  Much of that comes from seeing the cartoon Karloff cavorting costumed as the Sphinx or in a space helmut or as a stereotypical Mexican peasant.  (The caveman outfit I alluded to earlier is in a later issue.)  A good chunk of the series has recently been collected in hardcover by Dark Horse as the Boris Karloff Tales of Mystery Archives.  However, these reprints only go as far as #41, and do not include the issue discussed above. Still, I'll bet there's plenty of similarly fun and silly stories contained in those six volumes.
Posted by Ray "!!" Tomczak at 4:10 PM