Saga of the Swamp Thing #13 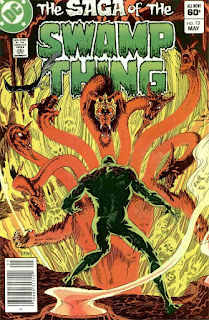 With all due deference to Mr. Timothy Callahan, an on-line columnist whose work I have often cited and linked to on this blog and with whose opinions I generally concur, I must, on this one occasion, respectfully disagree with his assertion, put forth in a column earlier this year at Comic Book Resources examining the last issue of The Saga of the Swamp Thing prior to Alan Moore's historic run, that Martin Pasko is a bad writer.
On the contrary, in my eyes, at least, Pasko is quite a good writer of certain types of stories, his forte being super-heroes.  Many of my all time favorite Superman tales, including "Race/Chase To The End of Time" (DC Comics Presents #'s 1 & 2), "Backward Battle for the Bizarro World" (Superman #306), and "A Million Dollars A Minute" (Superman #326) all carry his writer's credit.  He also turned out some pretty decent Star Trek comics for Marvel, including "All The Infinite Ways" in issue 13, which is one of my favorite Trek stories and which I may get around to writing about here someday.
Horror, on the other hand, based on the evidence of Swamp Thing, seems to be a bit outside of his wheelhouse.
The first handful of issues are alright.  The stories have some nice premises and good ideas in them, but Pasko, though he tries mightily, never succeeds in recreating the atmosphere of Gothic creepiness that pervaded Len Wein and Bernie Wrightson's run on the original series from a decade earlier.
By the thirteenth issue, however, the book had gone seriously off the rails.  This issue is, to be blunt, a mess. "Lambs to the Slaughter" is the conclusion of a multi-part storyline that wraps up some of the plot threads that Pasko had been dangling from issue #1.  It seems as if he's trying to pack too much into too short a story and the effect is that the story ends up making not one damn bit of sense.  I have never read any other story that was so heavily laden with expository captions and dialogue yet, paradoxically, utterly failed to satisfactorily explain what the bloody hell was supposed to be going on.
Though this may be a very bad comic, and, judging from Mr. Callahan's review of #19, the series may have failed to get any better, at least until Moore took over, its rather unfair to dismiss Pasko's entire body of work based on one misstep.  After all, even Alan Moore didn't create an enduring classic of sequential literature every time he sat down at the typewriter.  If I were to show his Green Arrow story to someone who had never read any of Moore's work, this mythical straw man reader would, I'm sure, no doubt be confused as to what all the fuss over Moore is about.
Posted by Ray "!!" Tomczak at 4:05 PM