"You belong at your captain's side, Mr. Spock...as if you've always been there and always will."
Edith Keeler said that in "City On The Edge of Forever."  To Star Trek fans, as well, the idea of the adventures of James Tiberius Kirk without his Vulcan science officer, and closest friend, seems almost unthinkable.  Yet Trek fandom has faced that possibility a couple of times. 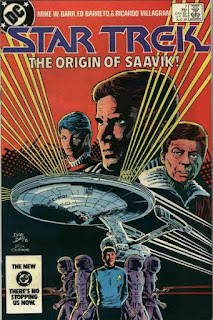 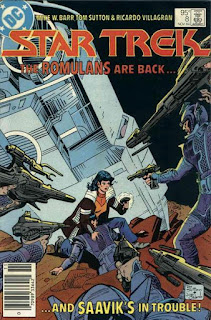 Saavik engages in a bit of computer hacking to learn where Xon is, then steals a spaceship and lights out for the rim of the galaxy.  Sarek, meanwhile, wants to chat with Kirk about Spock's katra.  Kirk begs off, saying that finding Saavik must take priority at the moment.  However, the admiral promises that he and Sarek will speak of the matter in the future.
Trailing Saavik to the energy barrier that surrounds the galaxy, as shown in "Where No Man Has Gone Before", the Enterprise finds itself unexpectedly under attack.  The final panel of #7 reveals the attacker to be none other than Saavik herself, in the grips of the Plak Tow, or "blood fever", that comes in the later stages of Pon Farr.
The story wraps up two months later in #8, as Sutton returns to the pencilling chores.  After her fevered attempts to destroy her own ship are thwarted, Saavik eventually is reunited with Xon, who has infiltrated a top secret Romulan scientific outpost near the galactic barrier.  The Romulans are attempting to use the energies of the barrier, the same ones that elevated Gary Mitchell to near godhood in "Where No Man Has Before," to create an army of invincible super  warriors with which to challenge the Federation.
These two issues, even with the spelling errors and continuity issues, comprise a fairly decent Star Trek tale that provides a neat, though not entirely seamless, segue into The Search For Spock.  After all, in the movie continuity the events of the third film follow those of it predecessor almost immediately.  The comic book, however, had the task of working in several months of stories in between them, and some dissonance between the two continuities is to be expected.
Posted by Ray "!!" Tomczak at 8:14 PM