For this, my 300th post on this blog, I thought it would be appropriate to review Hellblazer #300.  Unfortunately, I have yet to acquire a copy.  I fell quite ill around the middle of last week and by the time I was able to rouse myself from my sickbed each of the two comics shops I visited was sold out.  Apparently I'm not the only lapsed reader who came back for the final storyline. Perhaps all those copies were snapped up by fools who are still under the delusion that comics are sure-fire investments that will put their grandchildren through college.   The Laughing Ogre assures me they'll have more copies soon, so there will be a review forthcoming.  For now, however, I am forced to turn to another 300th issue, one already in my possession, for today's post. 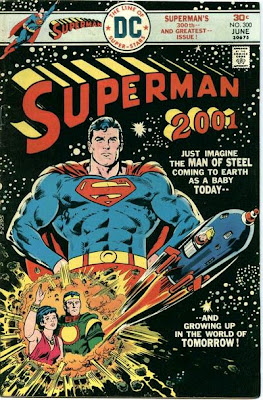 Superman #300 presents "Superman 2001", an "imaginary story" positing what would happen if young Kal-El, last survivor of the doomed planet Krypton, landed on Earth in the then present day of 1976 to emerge as Superman in the futuristic society of the year 2001.
Rather than crash-landing in the American Midwest, the rocket from the stars splashes down in the middle of the Pacific Ocean, leading to a race between the U.S. and the Soviet Union to claim the alien artifact from which the Americans ultimately emerge victorious.  The rocket's youthful passenger is dubbed Skyboy and raised in secrecy at a top secret U.S. military installation.
As of 1990, an unnamed "third world power" has emerged with dreams of world conquest and a plan to start a devastating nuclear war between America and the U.S.S.R.  that will leave them as rulers of the world in its wake.   Skyboy goes into action to prevent the conflagration and, following the close call, America and the Soviets begin peace talks.  Thus, peace reigns for the next eleven years.  Following the averted war, Skyboy disappears.  He leaves the military base, adopts the name Clark Kent and vows never to use his powers again.
On January 1st, 2001, the world celebrates the dawning of a new century and milennium--unlike the real world, where we marked those events a year early.  Clark Kent has become an anchorman for the Planet-Wide News where he recieves a report of a strange, four-armed creature suddenly appearing in Times Square.  Calling itself Moka, the beast claims to be the saviour who saved the world from nuclear destruction over a decade earlier and demands the world give him its allegiance and make him their ruler.  Surprisingly, the crowd in Times Square, at least, seems ready to go along with him.  Moka, it turns out, is a robot controlled by agents of that same "third world power" that almost caused the aforementioned nuclear destruction.
Knowing that Moka ain't what he says he is, Clark dons his Skyboy costume for the first time in years and, now calling himself Superman, flies off to do battle with the would-be usurper.
It's amusing to read speculative stories like this one from a vantage point several years beyond the "futuristic" setting of the tale.  As futurists, writers Cary Bates and Elliot S! Maggin make fine comic book writers.  There's little that is original in their vision of the future, which seems mostly derived from The Jetsons and other pop culture projections of the world to come.
By 1990, the United States has a female president who lives in a White House entombed within a giant transparent dome for her protection.  While women seem to have made great strides in this world, African Americans seem to have all but disappeared.  The only black faces in the entire issue show up in a crowd scene toward the end of the story.  Even the leaders of the mysterious "third world power" are shown as old white guys.  In our world, a third power has risen, but its run not by old white guys, but old Chinese guys--since its China to which I refer. Of course, the whitewashing of reality was pretty typical for comics, and most entertainment, of the day and remains so to a large extent today.
As the new milennium dawns, Americans relax in their homes in floating chairs while they watch something called "Tri-Vision".    I assume that's meant to be some sort of 3-D holographic future version of television.  Meanwhile, as Clark Kent reports, the large cities of America's West Coast from Boston down to Washington, D.C., have merged into giant urban area dubbed "Metropolis." Which, this being a Superman comic and the city of Metropolis being an integral part of the charatcter's legend, makes sense, at least for the story.  Although most of the other seemingly integral parts of the character's legend, such as Lois Lane, the Kents, the Daily Planet and Lex Luthor, have been abandoned.
In contrast to its futuristic setting, Superman #300 seems to me like something out of an earlier time.  The era of Superman comics under editor Julius Schwartz was concerned with humanizing and modernizing the character, most notably by having Clark Kent move into broadcast journalism, and "imaginary stories" were one of the remnants of the reign of former editor Mort Weisinger that had been cast into the dustbin of history.  Thus, "Superman 2001" feels more like the belated last hurrah of the Weisinger era than a celebration of the Man of Steel as he existed in 1976.
Posted by Ray "!!" Tomczak at 4:50 PM