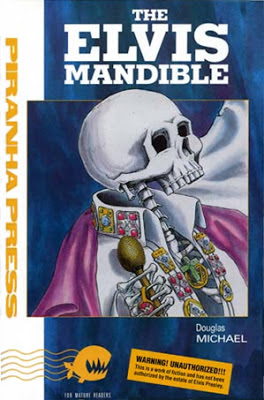 I am fascinated by Elvis Presley, not as a singer--though I'll admit he was one of the best--but as the pop culture icon he evolved into, especially in the years following his death.  It was this obsession that attracted me to The Elvis Mandible, a comic written and drawn by playwright and former National Lampoon cartoonist Douglas Michael and published by DC's now defunct Piranha Press imprint in 1990.
The comic really isn't about Elvis, however, or even the eponymous fragment of his skeleton.  That's merely the MacGuffin that drives this tale of board games, mystic architecture and CIA conspiracies centered around the intertwined fates of two men who come into possession of the King's severed jawbone.
The Elvis Mandible is, without a doubt, one of the strangest comics I've ever read.  In this case, at least, that is meant as high praise.  Michael's wonderfully simple cartooning style and straightforward matter of fact narration lend an odd documentary feel to the story, which only serves to increase the comic's overall surreal atmosphere.
I will admit that The Elvis Mandible is probably not for everyone.  It takes a certain off-kilter sensibility to fully appreciate this odd little gem.  However, if you think that applies to you, then I would wholeheartedly recommend seeking out a copy.
Posted by Ray "!!" Tomczak at 5:32 PM