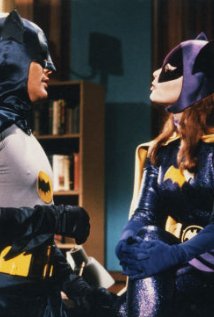 You might say that Batgirl is the Cousin Oliver of the DC Universe.  You might say so, that is, if you're an incurable smart-ass with a freakishly extensive knowledge of old TV shows.  If you're me, in other words, and thank whatever gods you may worship that you're not.  In the mid-60's, the Batman TV series kicked off a phenomenon that came to be called "Batmania", bringing renewed interest and popularity to DC's Batman comics and rescuing them from the brink of cancellation.  However, as it embarked on a third season, the TV series itself teetered on the edge of that very precipice.  So they did what many ailing series did in their waning years, they added a new character, just as, several years later, Robbie Rist as Cousin Oliver joined the cast of The Brady Bunch in its final season. Though, and I promise this is my final Cousin Oliver reference for this post, I never understood just who that character was meant to appeal to, the logic of bringing in Batgirl is inescapable.  The girls in the audience got a role model to identify with, and the boys didn't have to wait for a Catwoman appearance to have a spandex clad hottie to ogle.
"Enter Batgirl; Exit Penguin", Batman's third season premiere, opens to a typical day in Gotham City, as the Dynamic Duo return from rounding up Catwoman yet again and change back to their civilian identities of Bruce Wayne and Dick Grayson for a night at the opera with Commissioner Gordon, Chief O'Hara and the Commissioner's daughter, Barbara.  The TV show, by the way, actually bothered to come up with an explanation for why we hadn't seen or heard of Barbara Gordon before this.  It seems that she'd been off at college for the past four years.  She must have taken some time off after high school, as Yvonne Craig, the actress portraying Barbara, was thirty years old at the time.
Next we meet Barbara herself, heading home from her job at the Gotham Public Library to prepare herself for the aforementioned night at the opera when she is kidnapped by the Penguin and held captive in an empty apartment right next to her very own.  The Penguin's latest somewhat ill thought out scheme is to force Barbara to marry him, thus making him the police commissioner's son-in-law and thus, or so he believes, above the law.
Pengy  sends two of his henchmen out to snatch a minister to perform the ritual, and they happen to find pick one who happens to be having tea with Batman's butler Alfred, who tells the goons that he's the minister and gets nabbed in the real reverend's place.  Alfred is locked in the bedroom of the vacant apartment, where he sees Barbara climbing out the window in order to go back to her place and change to Batgirl, thus learning her secret identity.
Summoned by an emergency signal activated through a switch hidden in Alfred's belt buckle, the Dynamic Duo arrive on the scene and are just as surprised as the Penguin and his gang when a third caped crime fighter shows up.  Penguin and his henchmen are seemingly defeated, after which Batgirl disappears.  However, Penguin recovers and overcomes Batman and Robin, then packs up the Caped Crusaders, Alfred, and a dummy that they take for an unconscious Barbara Gordon and head off for their alternate hideout.
To make a long story short, if it isn't already too late, Barbara breaks out the Batgirl-cycle, trails the bad guys to their new lair, frees Batman and Robin and helps them defeat Penguin and swears Alfred to secrecy regarding her secret identity.
Despite the bad rap it has among comics fans for making a laughing stock out of their beloved hero, viewed objectively, Batman is actually a really well done TV show, and "Enter Batgirl; Exit Penguin" is one of its better episodes.  Due to declining ratings, the series, which had aired twice a week, was cut back to one episode a week for its final season, yet this episode delivers just as much fun and excitement as a typical two-parter, without all the extraneous silliness.  The highlight of the half-hour, as it should be, is Yvonne Craig's performance as Batgirl.  She perfectly portrays a young, sexy female crime fighter who does what she does not because of some trauma in her childhood, but because it's fun.  Lou Grant would hate her, because, by God, she's got some spunk.  Burgess Meredith's typically over the top performance as the Penguin, a role he seems to have been born to play, is also worth mentioning, and Commissioner Gordon's love and concern for his daughter give Neil Hamilton something other to play than a confused and buffoonish caricature.
The addition of Batgirl may not have saved Batman from its eventual cancellation, but creatively, she was quite a shot in the arm for the series.
Posted by Ray "!!" Tomczak at 3:36 PM