Potpourri for 1000, Alex (A Hodge-Podge of Seemingly Unconnected Random Thoughts) 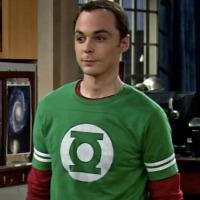 Here are a few things that have been on my mind over the past few days.
A couple of weeks ago, I asked the rhetorical question, "What does Sheldon Cooper (of The Big Bang Theory) think of DC's New 52?"  That was meant as a joke, but, having a fairly mindless job that allows me to ponder such things as I perform my menial tasks, I found myself thinking more about the question and coming up with  a partial answer.  Sheldon strikes me as someone who doesn't deal well with any sort of change, so I assume that he was quite distressed by the initial announcement.  However, as Green Lantern seems to be his favorite character, he was most likely at least partially reassured by the fact that that character's continuity has escaped the reboot essentially unaltered.
Speaking of Big Bang Theory, I was watching an older episode in which Leonard states that he has 2600 comic books in his apartment.  For a serious geek of Leonard's age, that number actually seems kind of small to me.  Perhaps he was referring to the comics that he actually keeps at home, with the bulk of his collection stored elsewhere.
Moving on, then, based on what I've read so far, it seems to me that DC's relaunch isn't so much a bold step forward into a new future for comics as a giant leap backwards to about the early 80's.  Co-publisher Dan DiDio has apparently recently announced that Crisis On Infinite Earths and all subsequent "Crisis-level" events never occurred. The upcoming Justice Society series will be set on Earth-2.  The Huntress may once again be the daughter of that parallel world's Batman.  On Earth-1, if that's what they're calling it, Barbara Gordon is Batgirl again and Supergirl is once again Superman's Kryptonian cousin (although that retro move actually occurred a few years ago). Over in Superman, Morgan Edge looks like he will once again be a major supporting player and there are hints that Clark Kent may once again be taking a job as a TV news anchor sometime in the near future.  Edge is now a bald, goateed African-American man, but other than that minor cosmetic change, he  appears to be the same character who was a thorn in Kent's side throughout the Bronze Age.  Now, if Clark were dating his childhood friend Lana Lang, who was also his co-anchor on the nightly newscast, then it would be 1983 in Metropolis all over again.
I can only fervently hope that DiDio's revelation that all stories with the word "Crisis" in the title never happened includes Identity Crisis.  If any story ever needed to be negated by editorial fiat, it's that one.  I would love to see Ralph Dibny show up alive somewhere with his girlfriend Sue Dearborn. With the apparent exception of Buddy Baker, it seems that super-heroes aren't allowed to be married in the new DCU.  Most famously, the marriage of Clark and Lois Kent has been retconned into oblivion, while in Flash, Barry Allen isn't even dating Iris West anymore.  But, as far as I'm concerned, they don't need to be married as long as they're alive.
By the way, it sort of reveals what a huge geek I am that I actually know Sue Dibny's maiden name, doesn't it?
I've found myself wondering if, in this new continuity, Batman has yet caught up with the killer of Thomas and Martha Wayne.  In the pre-COIE continuity, Batman found Joe Chill fairly early in his career, and, though  the details changed, in the post-Crisis DCU he also encountered Chill fairly early.  However, after the DC Universe was destroyed and restructured for the second time in Zero Hour, it was decided that not only had Batman never found his parents' killer, but it wasn't even Joe Chill.  I was unaware of the change, though, until I read "Public Enemies," Jeph Loeb's first storyline in Superman/Batman.  The change was undone soon after "Public Enemies" in what was basically a throwaway line of dialogue toward the end of Infinite Crisis.  Now, with the latest restructuring of the DC Universe in the wake of Flashpoint, the issue may once again be up  in the air.
I recently ran across this old interview on-line in which Denny O'Neil, editor of the Bat books at the time, defends the initial continuity change thusly: "It was done because we thought that Batman's motivations--and therefore his saga--are stronger if he never learns who killed his parents."
I have to disagree with Mr. O'Neil here.  To me, it makes Batman a stronger, and saner, character if he discovered and caught the Waynes' killer and still continued being Batman.  He becomes less of a revenge driven psycho and more the public spirited crimefighter that I feel he was meant to be.  Bruce Wayne's being Batman, after all, isn't really about finding his parents' killer, or revenge, but about making sure that no one else ever has to go through the ordeal that he did.  It's about helping other people, not making Bruce Wayne feel better. 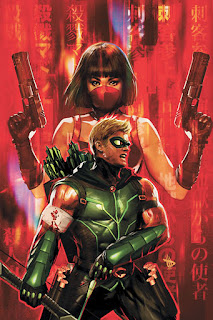 Finally, it appears that DC may not hate me as much as I'd initially thought.  They are sort of giving me a Christmas present.  As of December's issue #4, J.T. Krul will no longer be writing Green Arrow.  He cites some mysterious new project as the reason for his leaving, but I honestly don't care as long as he's gone. The new writers will be Keith Giffen and Dan Jurgens, who will continue as penciller with George Perez inking.
I still have a few reservations.  I'm assuming that Giffen and Jurgens' working relationship will be similar to that of Giffen and other collaborators, with Keith plotting and Dan writing the dialogue.  Unfortunately, dialogue is, to me, the weakest of Jurgens many weak points as a writer.  Also, from what I've read, it seems that the Green Arrow of this new series isn't quite the same character I fell in love with back in the 70's.  Apparently, he's closer to the character as portrayed on TV in Smallville than the O'Neil/Adams version. I only saw a couple of episodes  with Green Arrow in them, but I wasn't exactly thrilled with their depiction of one of my favorite characters.  Still, I do plan on picking up Green Arrow #4 the first week in December (provided that it stays on schedule) and I will, of course, report my impressions to you here on this blog.
Well, it certainly feels good to get all that off my chest.  Now, I've got some old Firestorm comics to re-read so that I can tell you all about them.
Talk to you later.
Posted by Ray "!!" Tomczak at 10:02 AM