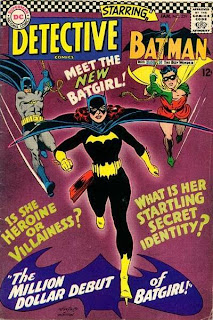 Created by a trio of comics legends, editor Julius Schwartz, writer Gardner Fox and artist Carmine Infantino, at the behest of Batman TV series producer William Dozier, who was looking for a female character to appeal to that segment of the TV audience, the new--and "real", as we're told in a caption--Batgirl (there had been a previous character called Bat-Girl in the late 50's and early 60's) met the comics reading public in the January 1967 issue of Detective Comics, #359, in a story entitled "The Million Dollar Debut of Batgirl!"   The introduction of Batgirl, incidentally, was not the first change made in the comics to accomodate the TV series.  One of Schwartz's first moves on assuming editorship of the Batman books was to kill off Bruce Wayne's butler, Alfred.  However, he and Fox were compelled to bring the character back to life when the producers wanted to include him in the show.
The story moves quickly, giving us just a two panel introduction to Barbara Gordon, the previously unseen and unmentioned librarian daughter of Gotham City Police Commissioner James Gordon, before she dons her Batgirl costume and is off to the Policeman's Masqerade Ball.  Setting off  for the ball, Barbara thinks that "...tonight will be the highlight of my life!"  She's right, of course, but not quite in the way she was thinking of.  A funny thing happens on the way to the party, when she sees Killer Moth's minions attempting to put the snatch on "...Daddy's millionaire friend" Bruce Wayne.  Proving that "clothes make the woman," she leaps into action to save Wayne, allowing the millionaire to slip away and change to Batman.  The Caped Crusader ends up having to rescue Batgirl while Killer Moth escapes. Her costume messed up in the fight, Batgirl tells Batman she won't be going to the masqerade after all, but holds back on telling him her name, despite thinking to herself that this might be both Batgirl's "...debut and farewell appearance..."
She soon finds, however, that after her brush with crimefighting, the fast paced life of the librarian just doesn't thrill her the way it used to.  Then one night, Barbara goes to deliver a rare book to Bruce Wayne and sees him apparently murdered by Killer Moth.  She once again goes into action as Batgirl, but soon learns that her interference has spoiled the Dynamic Duo's plans to follow Killer Moth back to his hideout.  Nonetheless, it turns out, somewhat predictably, I'll admit, that despite her initial blunder, it is Batgirl whose nick of time arrival at Killer Moth's lair serves to save Batman and Robin's bacon and capture the villain.
If, as the conventional wisdom among comics fans holds, the intentionally campy tone of the TV series had infected the comics, it is not much in evidence in this issue.  True, Killer Moth, with his themed henchmen Larva and Pupa, is a silly villain, and Robin spouts a couple of truly dreadful puns, while, at one point, daring to criticize Batgirl's "terrible puns."  For the most part, however, "The Million Dollar Debut of Batgirl!" is a fairly straightforward, serious minded adventure story, thanks to Fox's fast-paced and witty script and Infantino's suitably dark and moody artwork.
Quite a few of the "important" stories of the Silver Age--the first appearance of the Teen Titans springs to mind--are worth reading only for their significance to comics history.  Detective #359 is not one of those issues, though.  "The Million Dollar Debut of Batgirl!" stands on its own, aside from its place in history, as an entertaining and fun Batman story.
In a future post, I'll take a look at Batgirl's second first appearance, in the third season premiere of the Batman TV show.
Posted by Ray "!!" Tomczak at 9:24 AM