The decision to retire Batgirl seems to have been made as early as 1985.  Her brief appearance in Crisis On Infinite Earths #4 shows her questioning her own role as a hero even as she watches Supergirl save a plane load of people from the encroaching anti-matter cloud.  This portrayal was taken to the extreme in the Batgirl Special that formally ended her crimefighting career, for the time being at least.   When writer Barbara Randall named this story "The Last Batgirl Story" she wasn't kidding around.  The last page of the story is followed by a house ad for The Killing Joke, the Alan Moore penned tale that left Barbara Gordon in a wheelchair for the next twenty-three years and paved the way for her career as Oracle. 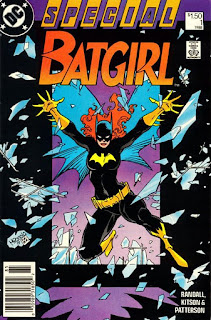 "The Last Batgirl Story" opens with a flashback to Batgirl's encounter with a hired killer known as Cormorant.  It was Cormorant's attempt on her life that forced Barbara to confront her own mortality and realize that she could get killed playing super-hero, bringing on the self-doubt and uncertainty that plagued her.  Flashing forward to the present, a man is murdered in the Gotham City Library where Barbara works and she becomes convinced, on the flimsiest of evidence, that Cormorant is the killer. Her obscession with Cormorant blinds her to mounting evidence that the real murderer is a female serial killer, dubbed "Slash" by the media, who is targeting men who've committed crimes against women.  At the same time, she's afraid to confront Cormorant.  Meanwhile, childhood friend Marcy, having deduced that Barbara is Batgirl, shows up hoping to convince Babs to hang up the cape.  She agrees to do so, but only after closing the books on the Cormorant case.
When she finally does confront her nemesis, she's about to get herself killed for real when Slash shows up because Cormorant just happened to be next on her list of intended victims.  Batgirl is reduced to little more than a spectator as Slash and Cormorant, with an assist from Cormorant's abused spouse, take each other out.  Nonetheless, Cormorant is finally captured and Barbara keeps her promise to retire from crimefighting.
The reason I didn't enjoy this story has little to do with its actual quality.  It's well written and features nice early work by artist Barry Kitson. (from a survey of Kitson's credits at the Comic Book Data Base, it appears that this was his first work in American comics.)   My problem is with the portrayal of the title character.  Batgirl is shown as confused, willfully blind, inept and ultimately useless.  If the intent was to make the reader agree with Barbara's decision to stop being Batgirl, then it was successful.  The Batgirl of this story isn't the type of super-hero I really care to read about, and Barbara did herself, Gotham and comics readers a favor by packing it in.
Posted by Ray "!!" Tomczak at 4:25 PM