Christmas With The Caped Crusader: ...And the Rest

Well, Christmas is almost behind us for another year. Beginning tomorrow, the stores will start putting out the Valentine's Day candy, or maybe even the Easter merch.  Before we move on to the next over hyped holiday, however, there are a few Batman Christmas tales in my stack of old comics that I haven't had a chance to get to yet. 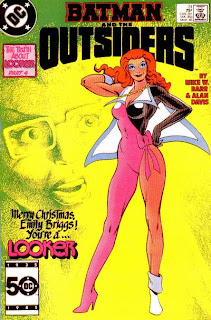 Even though the words "Merry Christmas" appear on the cover, and the holiday gets a brief nod in the last few pages, Batman and the Outsiders #31 isn't much of a Christmas story, being mostly taken up with the final chapter of the four part "The Truth About Looker" storyline. This story introduces a new member to the team and paves the way for the departure of Batman in the following issue, after which the series' name would change to Adventures of the Outsiders.  The book, along with the direct market only Outsiders, became the third title in DC's so-called "hardcover/softcover" experiment, along with the Teen Titans and Legion of Super-Heroes titles, in which the contents of the direct market edition  were eventually reprinted in the newsstand title. 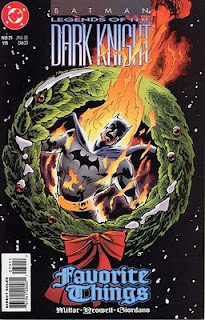 "Favorite Things" in Legends of the Dark Knight #79 starts with Wayne Manor being robbed during a Christmas party. Among the items stolen are a beloved childhood toy of Bruce Wayne's, the last Christmas present his parents gave him before their murders, and Batman moves Heaven and Earth to recover it.  Invoking the memory of Bruce's parents is usually good for some easy sentiment, but Mark Millar's script fails to tug at the heart strings in the way he must have hoped it would.  The art, by Steve Yeowell with inks by Dick Giordano, is the main reason to give this story a look.  It's amazing, actually, how well their styles mesh.
Speaking of sentiment, the only sentiment I expected from a story by Ed Brubaker was despair.  Have you read his Daredevil run?  If you thought Bendis' stories were too bleak, then skip Brubaker. 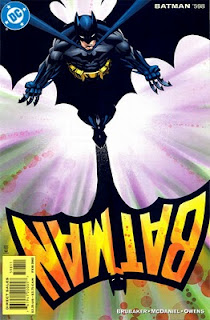 He just continues to heap the troubles on poor Matt Murdock issue after issue, with no light or hope apparently on the horizon. It's enough to make you want to slit your freaking wrists after awhile.  That's why I was so surprised that I actually enjoyed the issues from 2001 collected recently as DC Comics Presents Batman #3.  Among them is Batman #598, "Santa Klaus Is Coming To Town," in which a  mind reading serial killer with a German accent dressed in a Santa suit passes out explosive presents to those who find themselves on his "naughty" list.  Brubaker has created a villain worthy of a semi-regular spot on the roster of Batman's Rogue's Gallery, and I hope he eventually returns.
Meanwhile, Bruce Wayne's girlfriend refuses to let him ruin her holiday season and puts up a tree in Wayne Manor over his objections.   She eventually succeeds in getting him to lighten up for a little bit and celebrate with her. 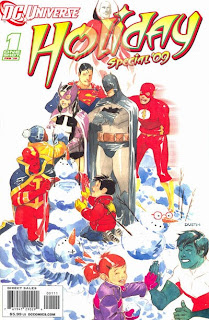 Finally, we have "Silent Knight," the lead story from last year's DC Universe Holiday Special '09.  In this wordless story by writer Jay Faerber and artist Peter Nguyen, the Batman pursues a gun-toting thief dressed as Santa to a warehouse where he discovers a whole gang of Santas. After he defeats their leader, the other Santas, rather than continue to fight, invite the Dark Knight to join them for some Christmas cookies and a cup of hot cocoa.  Had they been coerced into joining up with the lead Santa and were thanking Batman for rescuing them, or did they just realize the futility of putting up any more of a fight against the Caped Crusader?  Due to the lack of dialogue, this isn't really clear to me.
That's it for this year's Christmas celebration here at Gutter Talk.  Hope you had a wonderful holiday season.
Posted by Ray "!!" Tomczak at 8:38 PM