Christmas With The Caped Crusader: "Silent Night of the Batman" 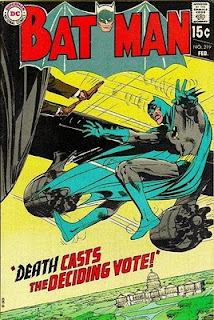 For someone who's normally so grim and humorless, the Batman sure does love Christmas.  Over the years he has starred in many classic and, if we're being honest, not so classic Christmas tales.  In these stories he can be seen singing Christmas carols, exchanging gifts, and generally letting the "Dark Knight" persona slip for a little bit.
I've got a small pile of these stories, and I'll be reviewing them over the next few weeks as we count down to Christmas Day.
The first, and earliest, of these is "Silent Night of the Batman," an eight page back up story from 1970's Batman #219, written by Mike Friedrich and drawn by Neal Adams and Dick Giordano.  In many ways, "Silent Night of the Batman" set the tone for all of the seasonal tales of the Caped Crusader that followed.
The story begins with Batman swinging over crowds of last minute shoppers on Christmas Eve on his way to answer the summons of the Bat-Signal.  A caption tells the reader that "For two thousand years, mystics have experienced the many mysteries of Christmas.  Tonight there will be one more..." 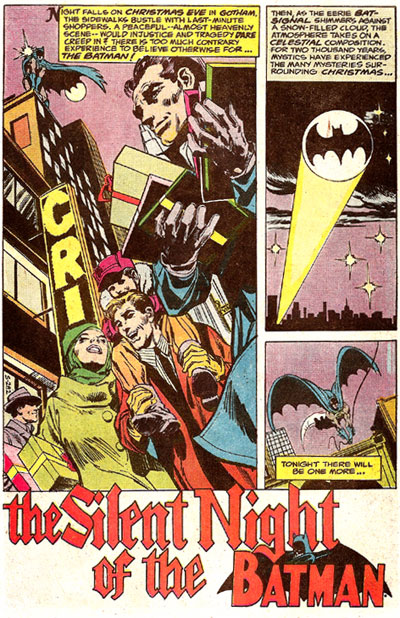 Arriving at police headquaters, Batman finds no crime wave or escaped lunatic to deal with. Instead, Commissioner Gordon, infused with the holiday spirit, has decided that "Christmas Eve is not a night...to be out patrolling."  Despite protesting that crime doesn't take a holiday, Batman nonetheless accepts Gordon's invitation to croon some Christmas carols with the night watch until he's needed somewhere else.
Meanwhile, out on the streets of Gotham, it appears that crime has indeed taken the night off. While Batman sings, a series of short vignettes show crimes or other tragedies averted.  Two of these depict criminals who reconsider their planned misdeeds when they encounter images of the Batman, reminding them of the possible repercussions of their actions.  Lastly, a woman is stopped from committing suicide by the reappearance of her husband, a soldier who had been missing in Vietnam.
As the sun rises, Batman realizes that he's been caroling all night, and not one call reporting a crime has come in.  It is, he says, "...like the Spirit of Christmas took hold on everyone!"  Then Batman sees a ghostly image of Gordon which asks him, "But what is the Christmas spirit, Batman--Might it not be...you or I?"  After the apparition fades, the real Gordon comments that it appears that the investment Batman has put into the city paid off for one night.  As the sun rises on Christmas morning, Batman swings home, cotemplating just what exactly happened that night. Did, perhaps, the "Spirit of Christmas" manifest itself as visions of the Batman in order to bring peace to Gotham for a night? As the caption, repeated in the final panel, says, its another of the mysteries of the season.
Posted by Ray "!!" Tomczak at 7:06 PM