Christmas With The Caped Crusader: The Brave and the Bold #184 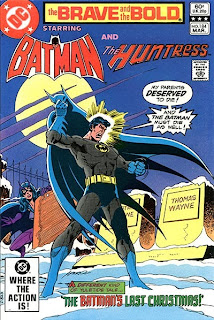 You know who loves Christmas even more than the Batman?
Mike W. Barr.
I'll bet he's got the biggest, most obnoxious outdoor light display in his neighborhood.  He certainly loves a good Batman Christmas story, and has written quite a few himself over the years.  Among the earliest of these is "The Batman's Last Christmas" in The Brave and the Bold #184, guest starring the Huntress and drawn by veteran B&B illustrator Jim Aparo.
This being the post-Haney B&B, the fact that Huntress lived on a different Earth from the Batman is actually accounted for.  Of course, given the nature of the pre-Crisis On Infinite Earths Huntress as the daughter of Earth-2's Batman, even Haney couldn't have just had her drop by without accounting for the dimensional difference.
With her parents, the Earth-2 Batman and Catwoman, gone, Helena Wayne, the Huntress, beams over to Earth-1 to spend the holidays with the only real family she has, her father's Earth-1 counterpart, whom she refers to affectionately as "Uncle Bruce."  She catches up with Batman just as he stumbles upon evidence that seems to suggest that his father, Dr. Thomas Wayne, had made payments to mobster "Spurs" Saunders to help Saunders establish his criminal empire.  Further investigation serves only to further incriminate Dr. Wayne, leading Batman to decide that his whole career as Batman has been a sham, since the parents whose deaths he's been avenging were seemingly just as bad as the criminals he fights. Thus, Bruce vows that "...It's time for the Batman to die!"
He tries to become the playboy he's always pretended to be, but his heart just isn't in it. Then he witnesses the Huntress save the life of a member of Saunders' mob who'd double crossed him.  The man had been Christmas shopping with his son, and Batman realizes that even though the guy was a crook, his son would have been traumatized by his murder. This leads him to further realize that his career as Batman has always been about more than just avenging his parents deaths. "...He (the Batman) exists to spare others the loss I felt when my parents died--a loss I felt even though they were also criminals."
Newly re-inspired, Batman decides to discover the real truth about his parents.  Back at Wayne Manor a memory of his last Christmas with his parents causes him to remember a tell tale clue which leads him to the realization that it was actually his parents' accountant, Amos Randolph, pretending to be Dr. Wayne and embezzling his money, who had financed Saunders. Batman confronts the aging and bedridden accountant while Huntress tells Saunders that she knows the truth about his connection with Wayne and has turned the incriminating records over  to Commissioner Gordon.
Usually in Batman's Christmas stories, the Caped Crusader is simply a player in someone else's story; the instrument through which they learn a yuletide lesson.  In "The Batman's Last Christmas", however, its the Batman himself who learns a valuable lesson.  He tells Helena that she "helped give me back my faith and my cause. I couldn't ask for a better gift!"  Then, at his parents' graves, he rededicates himself to his war on crime.
Posted by Ray "!!" Tomczak at 4:39 PM