Christmas With The Caped Crusader: Batman #309 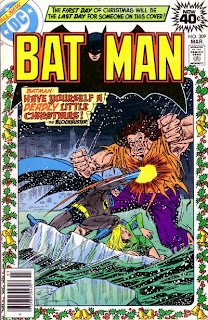 In December 1978, DC Comics was filled with the holiday spirit, despite having just canceled nearly half its line only a couple of months earlier in the infamous DC Implosion.  A house ad touted a quartet of holiday themed issues.  Among them were Green Lantern #113, Superman #333, and two Batman stories, The Brave and the Bold #148 and Batman #309.  I'll look at the B&B story next time, but right now let's examine "Have Yourself A Deadly Little Christmas" by Len Wein, John Calnan and Frank McLaughlin from Batman #309.
I mentioned in my piece on "The Silent Night of the Batman" how that story set the tone for many of the Batman Christmas tales that followed, and echoes of the earlier story can definitely be seen here.
Batman drops by police headquarters on Christmas Eve to exchange gifts with Commissioner Gordon, but there's no time to stand around and sing carols this night.  Batman soon finds himself on the phone talking to a young girl named Kathy Crawford who is attempting suicide. She's taken some sleeping pills and called the police just to have someone to talk to in her final moments.  She quickly hangs up on Batman, but fortunately she was on the line long enough for the call to be traced.  Batman rushes off to try to find her before its too late.
When he arrives at Kathy's apartment, Batman finds the door smashed in and the girl missing.  Earlier that evening, Batman's old foe the Blockbuster had witnessed Kathy's purse being stolen.  Confronting her assailants, Blockbuster recovered her purse and set out to return it to her.  Arriving at her apartment just as Kathy passes out, the brute carried her off to seek help. 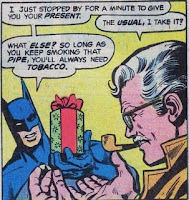 However, Blockbuster refuses to take Kathy to a hospital, as his muddled mind associates hospitals with S.T.A.R. Labs, where he was apparently subjected to painful experiments, presumably in a previous issue.  In fact, he becomes quite violent when anyone mentions the word "hospital."  This, of course, leads to a fight when the Batman finds him, which eventually spills onto the frozen Gotham River.  As the two fight, the ice cracks, endangering the already near death Kathy.  Blockbuster sacrifices himself to save the girl, disappearing, and presumably drowning, in the icy waters. Kathy is taken to  a hospital and, inspired by Blockbuster's sacrifice, decides to give life another chance.

This story is, unfortunately, marred by pretty poor art.  Calnan's figures are stiff and blocky, and his angles and perspective  seem a little skewed at times. I have, however, seen Calnan's art look worse in other Batman stories. I assume inker McLaughlin smoothed over some of the rougher edges.  The cover by Jim Aparo is not one of his better jobs.  It kind of looks a bit rushed, to be honest.
Still, despite the complaints about the art, and  though its not as inspiring as it tries to be, "Have Yourself A Deadly Little Christmas" is, all in all, a pretty decent entry in the annals of Batman holiday tales.
Posted by Ray "!!" Tomczak at 7:01 PM