Christmas With The Caped Crusader: "Wanted: Santa Claus--Dead or Alive!" 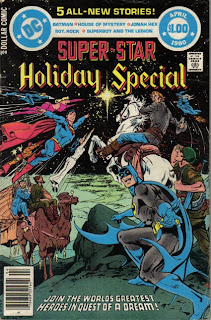 "Wanted: Santa Claus--Dead or Alive!", originally presented in 1979's Super-Star Holiday Special (DC Special Series #21), and subsequently reprinted many times, is, I believe (and please feel free to correct me if I am mistaken), the only collaboration between two of the men most responsible for shaping the character of the Batman as we understand him today, Dennis O'Neil and Frank Miller.  O'Neil, working primarily with artist Neal Adams in the early 1970's, helped to bring Batman back to his early 40's roots as a grim nocturnal vigilante in a rejection of the camp era of the 1960's epitomized by the Adam West TV show.  Miller refined that characterization during the 80's in story such as "Batman: Year One" and The Dark Knight Returns,  making the Dark Knight even darker and setting him on the road to becoming the obsessive near psychotic he has often been portrayed as in the last two decades
The story begins, as all good Batman Christmas stories do, on Christmas Eve as Batman notices that the Christmas star in a nativity display has been stolen, a detail that will, of course, become important later on. 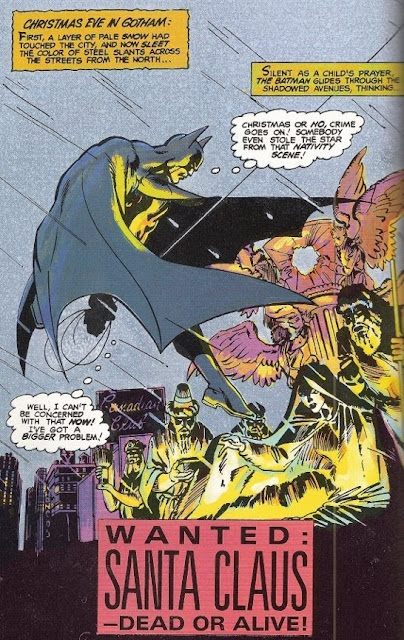 However, Batman's got bigger fish to fry at the moment, like busting up an underworld holiday party to learn why mobster Matty Lasko has arranged for a boat to be waiting in Gotham Harbor that evening.  Lasko reveals that he did it as a favor for his former cell mate Boomer Katz.  Batman learns that Katz has taken a job as a department store Santa and disappointedly deduces that the supposedly rehabilitated ex-con plans to rob the establishment.
It turns out that Boomer is a reluctant participant in the robbery scheme, and turns on the gang of robbers just before Batman arrives. Batman rounds up most of the robbers, but one escapes, taking Boomer as a hostage. The light of a star shining through the hole in the aforementioned nativity display where its Christmas star had been, leads Batman to the hood and his prisoner. Its a Christmas miracle that gives Boomer Katz another chance to straighten his life out.
"Wanted: Santa Claus--Dead or Alive!" is actually pretty typical of Batman Christmas stories of the period and O'Neil's work with the character in general.  Its true significance lies in the fact that it was drawn by Frank Miller, in what was, in fact, his very first work on the Batman.  Miller's Batman stories range from the sublime ("Batman: Year One", The Dark Knight Returns) to the silly (Spawn/Batman, All-Star Batman and Robin) and it all started here.
Posted by Ray "!!" Tomczak at 6:41 PM