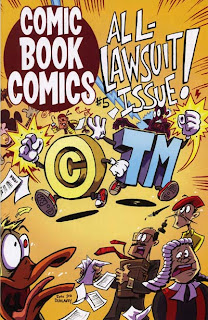 One of my favorite items in The Onion's look back at the 20th Century, Our Dumb Century, is an article headlined "Siegal, Shuster Sign Lucrative Publishing Contract."  The piece details how Jerry Siegal and Joe Shuster signed over to DC Comics "rights to their fantastical 'Superman' character in perpetuity" for $25 and a sandwich.  It's the kind of piece that almost makes you want to cry even as you're rolling on the floor laughing over it.  The sad part is that it's not all that far from the truth.  Siegal and Shuster received a mere $130 for the very first Superman story and all rights to the character, which has netted untold millions for the company  over the last seven decades.
In Comic Book Comics #5, the most recent installment of their six issue comic book history of  the comics industry, Fred Van Lente and Ryan Dunlavey detail the struggles of Siegal and Shuster, and their heirs, to gain their rightful due for creating one of the most well known and beloved fictional characters of all time.  Siegal and Shuster's tale, though, is only part of an overview of the history of creator's rights and copyright disputes throughout the history of the comics industry.  Van Lente and Dunlavey also cover the dispute between Jack Kirby and Marvel over rights to the characters he created for them and the return of his original artwork, the case of the Walt Disney Company versus the underground cartoonists collective calling themselves The Air Pirates, the famous court battle between DC and Fawcett over Captain Marvel and the tangled legal web that, until recently, has ensnared the rights to Marvelman/Miracleman. They also touch on the disputes between Joe Simon, Marv Wolfman and Steve Gerber and Marvel and Dan DeCarlo and Archie Comics.
Van Lente's clear, concise text provides an easily grasped introduction to these complex issues.  As the artist, Dunlavey may have the harder task. He has to find a way to somehow illustrate abstract legal concepts.  Fortunately, he is up to the task, with drawings that emphasize and enhance the key points of Van Lente's essay.
This is the only issue of Comic Book Comics I've read so far.  I picked it up because the subject matter was on my mind after re-reading Sirius Entertainment's similarly themed Trademark & Copyright Book.  However, if the rest of Van Lente and Dunlavey's history of the comics industry is as entertaining and informative as this issue, I'm definitely interested in reading more.
Posted by Ray "!!" Tomczak at 9:18 PM