(Once again, I present an installment of what could be the oddest ongoing feature of any comics blog in which I review the 147th issue of a long running comic series.  This time out, it's Iron Man.) 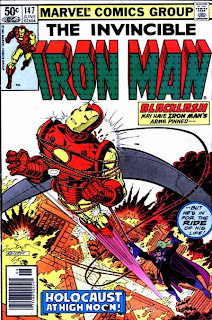 To be honest, I was never a fan of Iron Man, the book or the character.  Not that I had anything especially against the guy, it's just that the basic concept of the character never quite grabbed me.  Now that I think about it, I never got into Milestone's Hardware back in the mid-90's, either.  I guess I just don't dig armored super-heroes all that much.
That said, however, the relatively few Iron Man tales I've read have been fairly decent.  I was actually surprised by how much I enjoyed the Silver Age sagas collected as Essential Iron Man Volume Two.  Of course, it didn't hurt that the majority of them were illustriously illustrated by Gene "The Dean" Colan.  I still haven't gotten around to seeing the second movie, but the first one ranks in my mind among the best super-hero movies ever produced, thanks in large measure to the performance of Robert Downey, Jr. in the title role.
Furthermore, I'd heard quite a few good things, many of them from Jonathon Riddle, who lent me his copy of Iron Man #147 to read for this piece, about the David Michelinie/Bob Layton era of the title.  So I was fairly certain that I wasn't going to hate this issue.
"Holocaust At High Noon" opens with a splash page image of the Golden Avenger facing off against his old foe Whiplash, now powered up and calling himself Blacklash, who has been hired by some Philadelphia mobsters to kill Iron Man's, or rather his alter-ego Tony Stark's, head of security Vic Martinelli as Martinelli himself looks on. All around them, the campus of Stark International is ablaze as a result of Iron Man's initial battle with Blacklash.  Meanwhile, newly hired SI Vice President Yvette Avril, Public Relations chief Artemis Pithens, and a group of children visiting Stark International on a school field trip are trapped in the laboratory where the conflagration began.
Leaving Blacklash temporarily trapped under a pile of rubble, Shellhead flies off to deal with the flames and maybe save a life or two.  Freeing himself, 'Lash realizes that Stark International is soon to be swarming with police, firemen and other authority types in addition to Iron Man, so he flees to assassinate another day.
Sure enough, the villain returns bright and early the next morning to take another crack, literally, as his weapons are electrified whips, at Martinelli. I don't think it constitutes too much of a spoiler to reveal that the character whose name is in the indicia of this magazine eventually defeats and captures Blacklash.  Of course, I won't say exactly how, but the issue's cover, shown at the top of this post, does give some indication.
This issue is penciled by John Romita, Jr. with inks by Layton.  However, the art doesn't quite reflect the distinctive JR, Jr. style that has grown on me over the years since I first encountered it on Uncanny X-Men.  This may be at least partially because this work occurs early in Jr.'s career, though it seems to due mainly to the influence of Layton's finishes.  The art more closely resembles the work by Layton that I've seen in other comics.  Either way, it's a polished, professional product that tells the story  clearly and effectively, which what you want in a comic, especially one heavy on action.
That's certainly what Iron Man #147 is.  Basically, it's an all-fight issue, but, overall, a pretty good one. I said at the outset that I expected to like this issue, and I wasn't proven wrong.  With a good balance of action, characterization, and even a flash of humor when appropriate, "Holocaust At High Noon" is near textbook example of the kind of comic that Marvel did best during the tenure of editor-in-chief Jim Shooter in the late 70's and 80's.