Oh, By the Way--Today Was Mini-Comics Day 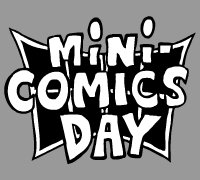 Today is, or more accurately, I suppose, since it is early evening in the Eastern Time Zone of the United States as I'm sitting down at my keyboard to type this and I'll probably spend about an hour writing and revising this post, was the first ever Mini-Comics Day.  The idea for Mini-Comics Day originated with  The International Cartoonist Conspiracy. Based on what I've been able to gather from their web-site, the Conspiracy appears to be a somewhat loosely knit organization of cartoonists group in several cities with the seminal Conspiracy cell originating in Minneapolis, Minnesota.
The event is somewhat akin to the more established 24 Hour Comic Day, in that the idea is to create a finished comic in the space of a day or less.  There are a few key differences.  First, the comic can be of any length.  Many mini-comics are just eight pages.  Perhaps the most important difference is that participants in Mini-Comics Day are expected to not only write and draw their comic, but publish it as well.  To successfully complete the challenge, you have to run off a few copies.  The number of copies is left up to each individual artist.
Several years before the Cartoonist Conspiracay came up with the idea of Mini-Comics Day, I actually did this.  One day in 2001, just for my own amusement on a day off, I was doing some drawings of various character types with captions giving their name and a brief description, and when I'd completed about a dozen of them, I decided to put them together into a small book. So I came up with a title, Timmy's Guide To Life, Timmy being one of the first drawings in the series; then did a couple more portraits to fill out the book and a front and back cover.  By four o'clock that afternoon, I'd pasted up the book and made about twenty copies.  Later, I did a larger print run and offered the book as a freebie at S.P.A.C.E. or any other comics shows.  I find it interesting that this little book produced on the spur of the moment turned out to be one of the most well recieved and popular things I've ever done.  This year being Timmy's tenth anniversary, I probably should do another print run sometime soon.
Several comics shops across the country, as well as in other lands such as Brazil, Indonesia, and the United Kingdom, sponsored Mini-Comics Day event.  There was, however, no such event held here in Columbus, Ohio.  Which is surprising given the sheer number of cartoonists that this city is home to, many of whom have been publishing their own mini-comics for several years.  The city also hosts S.P.A.C.E., which, by the way  and in case you didn't know, stands for Small Press and Alternative Comics Expo.  Many past attendees (though, as I searched the web just now I was unable to find an example, but I know I've read this somewhere) have cited S.PA.C.E. as one of the few small press shows that still prominently features mini-comics.  Perhaps, if Mini-Comics Day becomes the annual event that its originators envision, there will be a Columbus event next year.  Maybe I'll even try to organize it myself.
Posted by Ray "!!" Tomczak at 7:31 PM